At Brill's, Looney makes it two straight on MARS 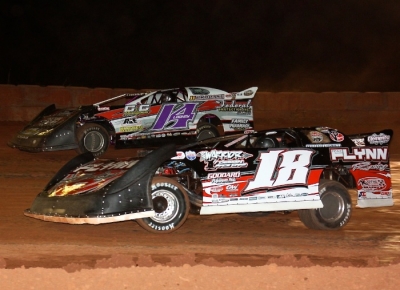 Looney outdueled fellow front-row starter Ronny Lee Hollingsworth of Northport, Ala., in the early laps, then held off a late challenge from six-time series champ Terry Phillips of Springfield, Mo., for the $3,000 victory. | Slideshow

Phillips, who took second from Hollingsworth on the 10th lap, was the runner-up while the polesitting Hollingsworth settled for third. Jesse Stovall of Galena, Mo., and Jeremy Payne of Springfield — who brought out the race's lone caution with a turn-two spin on the second lap — rounded out the top five in the 17-car field.

Notes: Looney's Hatfield-powered Victory Circle Chassis is sponsored by Family Pharmacy, Federal Protection Inc., and Republic Glass. ... The tour stays in Oklahoma for a Saturday event at Salina Highbanks Speedway. ... It's the first series trip to Salina in 10 years.