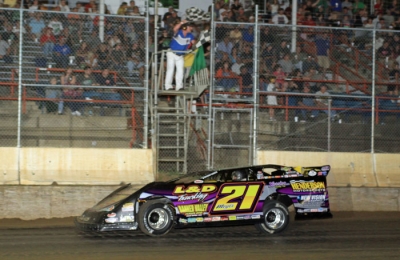 HIGHLAND, Ill. (June 2) — Billy Moyer of Batesville, Ark., got the Tri-State Challenge off to a winning start Thursday at Highland Speedway, leading all 40 laps for a $5,000 victory on the Northern Allstars Late Model Series.

Moyer took command from the pole position and held comfortable leads most of the race, then kept fifth-starting Jason Feger of Bloomington, Ill., in check late in the race. The high-running Feger was second followed by Shannon Babb of Moweaqua, Ill., and Mike Spatola of Frankfort, Ill., who briefly ran as high as second. | VIdeo| Slideshow

Michael Kloos of nearby Trenton, Ill., rallied from 11th to cross the line fifth, but race officials gave that spot to hometown driver and outside front-row starter Mark Faust because Kloos dipped into the infield to overtake Faust..

Moyer notched his fifth career Northern Allstars victory and his first victory at Highland in 12 years, going back to a UMP DIRTcar Summernationals triumph during one of his six tour championships.

The Tri-State Challenge continues Friday at Paducah (Ky.) International Raceway and wraps up Saturday at I-55 Raceway in Pevely, Mo.