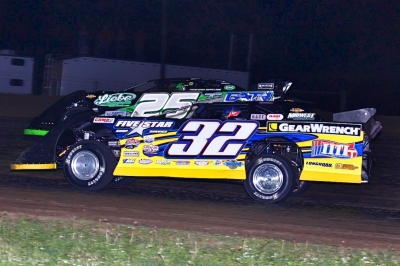 Chris Simpson led all but three laps of Sunday's Alphabet Soup Classic at I-80 Speedway in Greenwood, Neb., before mechanical problems forced him out, handing the victory to Chad Simpson in a race co-sanctioned by the Corn Belt Clash, Lucas Oil MLRA and NCRA.

This time, the front-row starting Chris Simpson was in front when the checkers fell to take the victory over the polesitting Chad, last year's Corn Belt Clash champ from Mount Vernon, Iowa. Eckrich, of Oxford, was third followed by Jason Rauen of Farley, Iowa, and Dave Eckrich of Cosgrove, Iowa.

The race was the first of a series tripleheader that continues Thursday at Fayette County Speedway in West Union, Iowa, and concludes Friday at Mississippi Thunder Speedway in Fountain City, Wis.