Two in a row as Sheppard nips Voigt at Macon 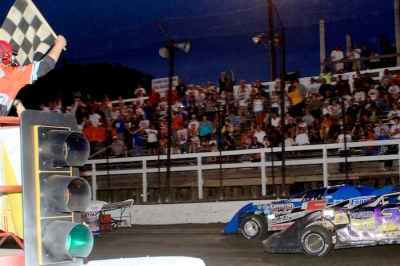 Brandon Sheppard (B5) edges Mark Voigt (30) at the checkers. (stlracingphotos.com)

The 18-year-old Sheppard's $2,000 victory follows Friday's NALMS victory at Lincoln Speedway and gives Sheppard three victories overall in 11 days. Voigt was followed across the line by Ryan Unzicker of El Paso, Ill., while Dillan White of Crofton, Ky., and Donny Walden of Towanda, Ill., rounded out the top five.

The winner's father, Steve Sheppard Jr., pulled to the infield before the halfway point of the 30-lapper and was able to watch him complete the victory on NASCAR Night.

Notes: Sheppard's Pierce Race Car is sponsored by Fromme Enterprises, Sheppard's Car Crushing and Shepp's Bar & Grill. ... The night's racing was sponsored by Bully Dog. ... NASCAR drivers Ken Schrader, Kenny Wallace and Justin Allgaier were on hand to sign autographs. Schrader and Wallace competed in the modified division with Schrader winning the feature while Wallace was third. ... The race was also part of the Big 10 Series, a minitour among Macon, Lincoln, Shepp's and Belle-Clair that carries a point fund paying $3,000 to the champion. ... The season centerpiece Tri-State Challenge is up next for the Northern Allstars with $5,000-to-win events June 2-4 at Highland (Ill.) Speedway, Paducah (Ky.) International Raceway and I-55 Raceway in Pevely, Mo.