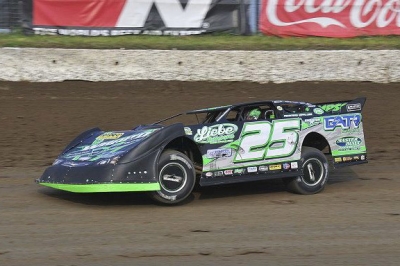 Chad Simpson gets rolling at I-80 Speedway, where he won the Alphabet Soup Classic later Sunday evening. (fasttrackphotos.net)

GREENWOOD, Neb. (May 29) — One brother's heartbreak was another brother's good fortune on Sunday night at I-80 Speedway.

Polesitter Chris Simpson led virtually all the way Sunday at the tri-sanctioned Alphabet Soup Classic, but when his engine let go with three laps remaining, older brother Chad Simpson was there to inherit the lead and the $5,000 victory. | Slideshow

Outside front-row starter Kyle Berck of Marquette, Neb., finished second at the 4/10-mile oval while Al Purkey of Coffeyville, Kan., rallied after a consolation race victory to finish third Travis Dickes of Madison, Neb., and Al Humphrey of Giltner, Neb., rounded out the top five.

Chris Simpson of Oxford, Iowa, started the night by rallying from the tail of a heat race to a victory, which put him on the pole for the main event. He proceed to lead every lap until a mechanical failure knocked him out of the Memorial Day weekend special.