Feger fights off challenge for $10,000 at Tri-City

From track, staff and correspondent reports 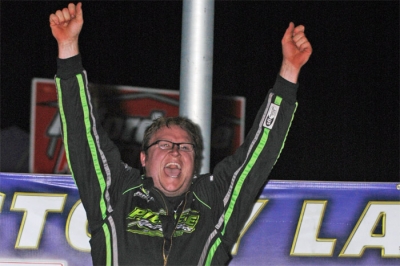 The ninth-starting Feger, who quickly marched to the front, matched his career-richest payday — also at Tri-City — with a $10,000 purse in the non-touring UMP DIRTcar Series event. | Slideshow

The race's key moment came in turn four on the 49th circuit with the high-running Feger out front the low-running James challenging. James drifted up in a bid for the lead and Feger never let off the gas as the frontrunners made contact, the right-rear of the James machine slapping the left-front of Feger's car.

Feger quickly regained momentum and pulled back away, controlling the final lap

"We got together there. I was coming down and I didn't really know he was there. I was like 'Oh no!' " Feger said. "I'd rather have won it the easy way, but we'll take it however we can get 'em."

James, who started fourth and briefly led early after taking the lead from polesitter Brian Shirley of Chatham, Ill., felt like his car was better in the closing laps.

"He hooked a rut and kind of shoved a little bit there, and I hit a good lap through there and came out of (turn) four," James said. "My guys said I would've cleared him if I just would've went on. But I didn't want to hit him, and I didn't want to take us both out."

James settled for second at the 3/8-mile oval in a home-state event for car owner Riggs Motorsports while outside front-row starter Billy Moyer of Batesville, Ark., was third. Dale McDowell of Chickamauga, Ga., ralliedï¿½ from 18th to finish fourth and Eric Jacobsen of Seacliff Beach, Calif., rounded out the top five.

Shirley jumped out to the early lead, but by the time James was challenging after a half-dozen laps, Feger was already in the mix as the three drivers mixed it up. Feger took over and led the rest of the way in a race slowed by a single caution for a slowing Chad Zobrist.

"When they dropped the green flag this thing on was on rails," Feger said. "I've tried to play the conservative (role), and it seems like I'm better at just getting to the front and trying to hold on. You never know what's going to happen. That's what we did. The car was just go good tonight."

James stayed in contention and was in position to challenge when Feger made contact in trying to put a lap on reigning track champ Craig Smith midway through the race. His next best chance came as the frontrunners headed for the white flag, but Feger held him off.

"I was just praying we didn't give another one away," the winner said.