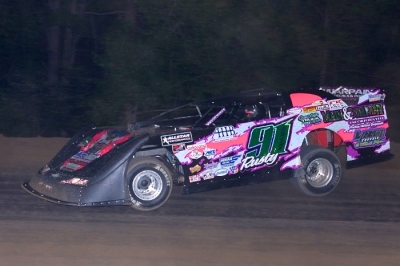 The most serious wreck came when third-running Dona Marcoullier of Houghton Lake, Mich., slipped over the turn-four banking and rolled his No. 6m. He walked away with no serious injuries.

Notes: Schlenk's Lazer Chassis is sponsored by Main & Company, Warpaint Graphix and Micro-Armor. ... Schlenk's fast lap of 14.04 second lowered the 2-year-old track record of Zack Olger (14.06). ... Olger won the night's modified feature; he swept both divisions at Mount Pleasant a week earlier. ... David Hilliker was running sixth in the main event when he broke against the turn-four wall. ... The track drew 80 cars overall in four divisions, but the modified mini and stock mini features were postponed because of curfew. ... ALMS returns to Mount Pleasant Aug. 5 for its second and final visit of the season. ... The Memorial Day weekend tripleheader continues for ALMS competitors in Ohio with races Saturday at Oakshade Raceway near Wauseon and Sunday at Eldora Speedway in Rossburg.