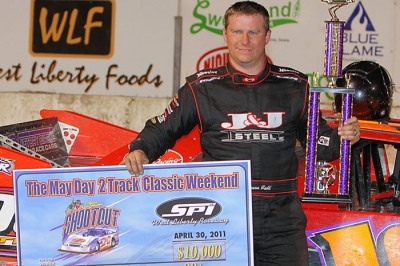 WEST LIBERTY, Iowa (April 30) — Shannon Babb of Moweaqua, Ill., regained the lead from Brian Birkhofer of Muscatine, Iowa, on Saturday at West Liberty Raceway for an unsanctioned May Day victory worth $10,000. The victory was Babb's first since switching in 2011 to a Victory Circle Chassis out of Billy Moyer's Batesville, Ark., race shop.

"I kind of relaxed after Birky" took the lead, Babb said after the 50-lapper. "I thought he was checked out there. You just don't ever give up, and just got him there at the end."

Birkhofer, winner of last year's May Day event at West Liberty, started on the pole but settled for second amid rough conditions on the half-mile oval while Moyer finished third. Brian Shirley of Chatham, Ill., and Justin Mitchell of Cedar Rapids, Iowa, rounded out the top five finishers.

"Second's all right," said Birkhofer, who was glad to race after gloomy weather forecasts recently. "It's been kind of a struggle to start the year. We've just gotta run around home and get our rhythm together."

Babb, making just his fourth start in the Victory Circle Chassis, was glad to guide it to victory lane.

"We had a lot of help from Billy with this new Victory Circle car. It's been excellent. It's really fast," he said. "We had a lot of tough competition there. Birky stepped 'er up there at the end, and Billy, I knew he wasn't going to fall far behind me."