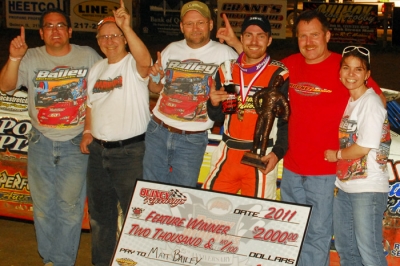 QUINCY, Ill. (April 10) — Fans at Quincy Raceway got to applaud the exploits of another hometown hero in Sunday’s Deery Brothers Summer Series feature.

Burgtorf came into the night with a record nine Deery wins at Quincy to his credit and became an even better bet to get No. 10 when he drew the pole start.

He was running at the front of the field when the only yellow flag Late Models saw all night came out on lap 10. The fourth-starting Bailey went low to take the front spot away on lap 12, lost the point briefly as the two came to the flagstand on lap 16, then regained the advantage during a side-by-side tussle that continued past halfway.

Bailey got some distance on Burgtorf as the two encountered backrunners with 10 laps to go. Slower cars weren’t a factor, however, as Bailey collected the checkers by most of four lengths over Burgtorf.

Notes: Bailey's Rocket Chassis is sponsored by Grant's Auto & Tire, Bernzen Lumber Co. and Kelly's Tavern. ... Bailey, the son of long-time IMCA racer Lonnie Bailey, had a previous best Deery Brothers Series finish of sixth at Quincy in 2006 in a half-dozen series starts. ... The last eight Deery events, going back to Aug. 3 of 2010, have resulted in as many different winners. ... T.J. Criss cashed in on the $250 Sunoco Race Fuels feature qualifier drawing. ... Next up is a tripleheader series weekend April 15-17 at Davenport Speedway, Jackson County Speedway and Quad City Speedway.