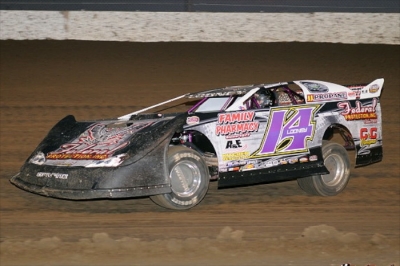 TOPEKA, Kan. (April 8) – Just one week after ending a 14-year drought on the Lucas Oil Midwest LateModel Racing Association tour, Brad Looney found himself in victory lane once again after Friday night’s MLRA feature at Heartland Park Topeka. The Republic, Mo., driver led all but one lap of the 35-lap race for a $3,000 payday at the facility's 3/8-mile dirt oval. | Slideshow

After the race was slowed by four cautions in the first four laps, the pole-starting Looney took charge during the caution-free final 31 laps. His only challenge came late in the race when John Anderson of Omaha, Neb., made a run off of turn two to briefly take the lead.

Looney then changed his line and battled back around Anderson. Looney held the lead for the remainder of the race to score the victory, forcing Anderson to settle for the runner-up finish. Al Purkey of Coffeyville, Kan., advanced from his 18th starting position to finish third with Jesse Stovall of Galena, Mo., fourth and Tony Jackson Jr. of Lebanon, Mo., fifth.