Unzicker capitalizes, gets $4,000 for Peoria victory 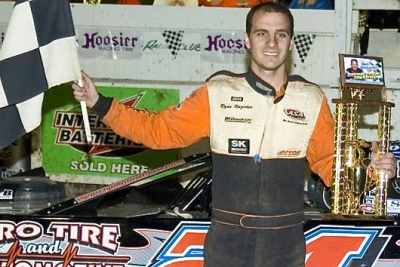 Wes Steidinger of Fairbury, Ill., led the first nine laps from the pole in a Larry Reikert-owned car before a spin involving Scott Schmitt and Frank Heckenast Jr. drew the first caution flag.

On the restart, the seventh-starting Feger pressured Steidinger, taking command in turn three to lead the 11th lap. Feger built a four-second lead erased by a lap-38 yellow flag for Donny Walden.

Unzicker was up to second on the restart, and when Feger's broke an axle heading into turn three, Unzicker took over, surviving a lap-42 caution and holding off Spatola in the final laps.

Unzicker, who also won the previous night at Macon (Ill.) Speedway, initially bolted on four hard-compound tires before the 50-lapper, but adjusted when the track crew watered the higher groove before the modified feature.

“We had four hard tires on, but when they put that water on top, we put soft tires on all but the right rear, and that might have won us the race,” Unzicker said. “It’s just such an honor to win a race named after one of the greatest drivers off all time in Don Bohlander. This is a special win for us.”