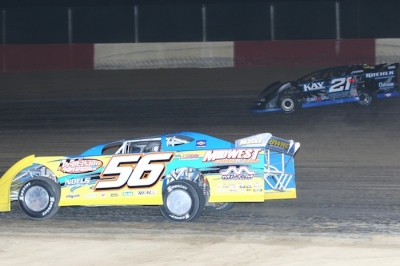 The series victory was Harris’ career fourth and paid $2,000. Eckrich was second with Iowans Tom Darbyshire of Morning Sun, Tyler Bruening of Decorah and Terry Neal of Ely rounded out the top five.

After drawing the outside row two start, Harris went immediately to the top groove. He caught up with the back of the field by lap 15 and led the second-running Darbyshire by a full straight at midway.

Harris had lapped 13 cars before the late caution came out. Eckrich, the 2010 tour rookie of the year, had started 15th, caught Darbyshire for the second spot and was making up ground while Harris looked for a way around three-wide backrunners.

The yellow resulting from defending champion Ray Guss Jr.’s flat tire erased what was still a sizable lead for Harris, who stuck to the higher line following the restart and then outran Eckrich coming out of the turns and took the win by two car lengths.

Darrel DeFrance was 13th in upping his perfect series attendance streak to 368 consecutive events. Guss raced his way back to 14th.

Nineteen race dates comprise the 25th annual tour. Next up are the $3,000 to win Slocum 50 at 34 Raceway in West Burlington on April 9 and the April 10 event at Quincy, Ill., Raceway.