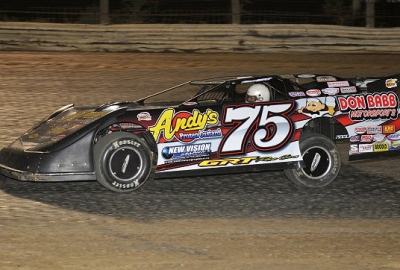 Phillips earned $6,000 for his flag-to-flag victory in the season-ending event while Al Purkey of nearby Coffeyville, Kan., was also a big winner, edging Brad Looney of Republic, Mo., by merely two points for his unprecedented seventh series championship.

Brandon McCormick of Lebanon, Mo., finished second in the 50-lap feature followed by polesitter Jeremy Payne of Springfield, who races as a teammate to Phillips. Jesse Stovall of Galena, Mo., was fourth in a Steve Rushin-owned car and Looney rounded out the top five.

The title chase was a tight one through the last few months of the season, and Purkey entered the race with a four-point edge on Looney. Points are doled out two points per position, so Looney was in good shape starting third while Purkey, who co-promoted the event, started 11th.

Looney slipped back to finish fifth, and with Purkey advancing five spots to finish just behind him, he held on to win the championship by two points.

The event, which saw preliminaries held Friday night, was postponed to Sunday after a power outage left the track without electricity on Saturday.

Notes: Phillips drives a GRT Race Car powered by a Hatfield Racing Engine and sponsored by Andy's Frozen Custard and Don Babb Motorsports. ... Phillips has 101 series victories, the most victory for any driver on a Dirt Late Model touring series. ... Third-place finisher Jeremy Payne won every event he competed in except the Late Model feature. In the modified division, he swept a heat race, pole dash and feature event. In Late Models, he won his heat and the dash. ... Evan Hubert of Cross Timbers, Mo., won the Lucas Oil MLRA Rookie of the Year title. ... Alan Vaughn had fuel pump problems in the consolation race, but got a series provisional to start the main event. ... Among drivers failing to make the main event: Gary Gorby, Jimmy Seagraves, Aubrey Swan and Andy Gerstenkorn.