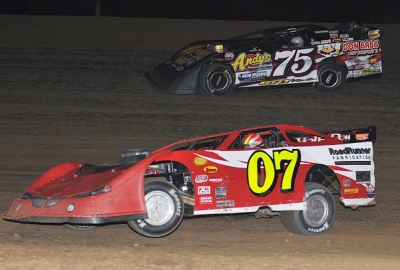 MAYETTA, Kan. (Oct. 8) — Kelly Boen's third-to-first move on a pair of former series champions on the 13th lap carried him into a lead he'd never give up Friday at Thunder Hill Speedway. Boen cruised the rest of the 25-lap Lucas Oil Midwest LateModel Racing Association event for a $2,000 victory in the Thunder on the Hill weekend opener. | MLRA notebook | Slideshow

Chad Simpson of Mount Vernon, Iowa, finished second with Terry Phillips of Springfield, Mo., in third. Al Purkey of Coffeyville, Kan., was fourth to move into a tie for the Lucas Oil MLRA points lead with fifth-finishing Brad Looney of Republic, Mo.

Phillips and Purkey battled up front early in the feature while the 10th-starting Boen quickly made his way to the front. The race's lone caution on the 10th lap for Jason O'Brien bunched the field, and Boen began tracking Phillips and Purkey on the restart.

Just past the race's midpoint, Boen dove low in turns three and four to overtake Phillips and Purkey, then cruised the rest of the way in an event that lasted until the wee hours.