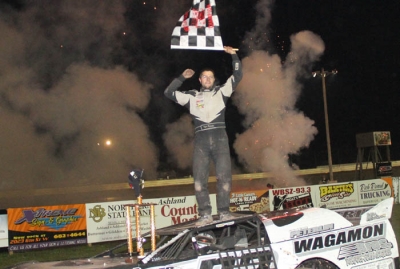 ASHLAND, Wis. (Oct. 1-2) — Polesitter Kyle Peterlin of Hibbing, Minn., dominated the WISSOTA Late Model portion of the 35th annual Red Clay Classic at ABC Raceway on Saturday for a $4,000 victory, one of the biggest of his career.

Peterlin, who already wrapped up Minnesota track championships earlier this season at Hibbing and Proctor, faced a lone challenge on a lap-30 restart and wrapped up the 50-lap victory, his first-ever at ABC Raceway.

Peterlin got the jump on Matthees at the outset, building a four-second lead by the time he entered lapped traffic on the 12th circuit. Behind him, Redetzke worked a higher line to try to sweep around the second-running Matthees while Steve Laursen of Cumberland, Wis., took several peeks to the inside. A short distance back was a tight side-by-side duel for fifth between Pat Doar and 11th-starting Justin Fegers.

Peterlin worked through backmarkers almost effortlessly while Laursen finally fought his way by Matthees for second on lap 18 before he, too, had to contend with the traffic. Fegers and Doar also slipped by Redetzke and into the top five while working through slower racers on lap 21.

Peterlin’s lead was better than a straightaway on lap 30 when Laursen’s car was tapped and spun by Fegers, who had joined the dogfight for second. Fegers went to the rear for the restart.

Laursen was right on Peterlin's rear deck for the restart, but Peterlin calmly pulled away again under green.

On lap 34, Redetzke surged again to challenge Anvelink for fourth, bringing Darrell Nelson along, and a lap later Matthees found his way back by Laursen for second. But by that time, Peterlin’s lead was again over two seconds.

Anvelink worked past Laursen’s fading car with 10 lap remaining with Redetzke and Nelson in tow, and soon after that Anvelink caught and passed Matthees for second.

With six laps remaining, Peterlin caught lapped traffic and Anvelink drew within one second of the leader at the white flag. But it was too late for a serious challenge as Peterlin grabbed the checkered flag with the cushion of a lapped car protecting him from Anvelink.

Notes: Peterlin's Rocket Chassis is powered by a Wagamon Bros. engine with sponsorship from Aftershock Vinyl Works, Town & Country Garages and Cabins and Cobb Creek Grocery. ... Prior to the feature, the starting field paid tribute to the late Brent Laursen of Osceola, Wis., a three-time Red Clay Classic winner. The four-wide pace-lap salute was led by Brent’s brother, Steve. Brent Laursen died in mid-September from complications from leukemia. ... Rain delayed Friday's prelims about an hour, then postponed some prelims until Saturday. ... The event drew 206 race cars overall.