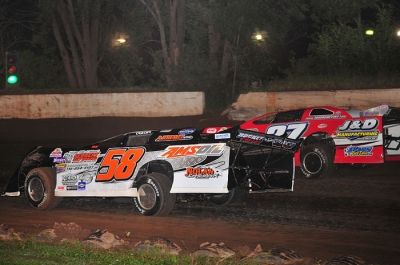 MENOMONIE, Wis. (Sept. 25) — A.J. Diemel of Bonduel, Wis., overtook polesitter Jake Redetzke of Eau Claire, Wis., amid traffic Saturday at Red Cedar Speedway and raced to a repeat of his '09 victory in the Punky Manor Challenge of Champions. Diemel, who started sixth, earned $4,000 in the WISSOTA-sanctioned event that was slowed by a single lap-two caution. | Slideshow | Prelims

Redetzke settled for second while outside front-row starter Justin Fegers of Mound, Minn., who led early in the 40-lapper, was third. Chad Mahder of Eau Claire and John Kaanta of Elk Mound, Wis., rounded out the top five in the 25-car feature.

Fegers was out front early but the lone yellow flag waved on the second lap when Nick Anvelink turned around in turn two. Before everyone could stop, his father Terry Anvelink's car was deposited onto Nick’s hood by another car. Both Anvelinks were able to continue.

On the restart, Redetzke kept pressure on Fegers with Brent Larson, Mahder, Diemel and ninth-starting Jimmy Mars in pursuit. Redetzke slipped underneath Fegers in turn two and took command with Diemel then dropped Fegers to third.

Things started to get wild when Redetzke caught the tail of the field about the time the race surface began to take rubber, narrowing the racing groove. Redetzke worked and worked, but he was stuck behind slower cars he couldn't manage to lap.

That allowed the rest of the lead pack to catch him, and suddenly the top six cars ran nose to tail. When Redetzke tried to jump into the outside groove to go around, he got hung out to dry. When traffic suddenly broke, Diemel shot by on the low side to take over the lead while his three closest pursuers were still stuck behind slower cars.

By then, Diemel had a nice lead and Redetzke couldn't track down the winner despite finally clearing traffic.

Notes: Diemel's Rocket Chassis is sponsored by Amsoil, Seubert's Calf Ranches and Integra Shocks. ... The event is sponsored by Bill’s Distributing and Tim’s Automotive Machine ... The event honors Neil “Punky” Manor Jr., a Late Model champion at area tracks who was killed in a highway accident.