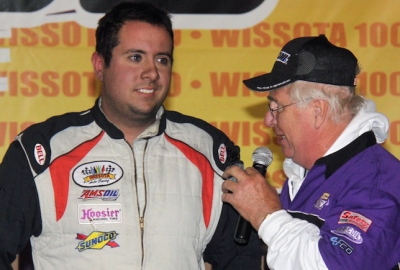 HURON, S.D. (Sept. 18) — Outside front-row starter Marshall Fegers of Mound, Minn., collected a career-high $6,000 on Saturday at Dakota State Fair Speedway with a victory in the Late Model portion of the WISSOTA 100.

Fegers finished ahead of older brother Justin Fegers, who was dropped to the end of the running order when he came up 50 pounds light at the scales. | Slideshow

Brian Diede of Huron, S.D., led early in the race and Diemel took over briefly during the middle stages, but once the younger Fegers took over, the race was over. He survived challenges on several Delaware-style restarts from Diemel and his brother for the victory.