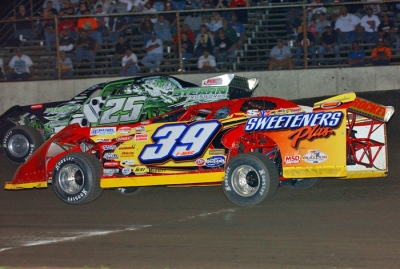 GRANITE CITY, Ill. (Sept. 17) — Gambling with soft-compound tires, Tim McCreadie of Watertown, N.Y., raced into the lead early at Tri-City Speedway and held on to capture the Friday's Dodge Ram 50 and a $7,000 payday.

McCreadie kept his No. 39 in the moisture on the low side of the 3/8-mile oval and fought off challenges from runner-up Shannon Babb of Moweaqua, Ill., for the victory. Polesitter Billy Moyer of Batesville, Ark., was third followed by Rick Eckert of York, Pa., and outside front-row starter Jason Feger of Bloomington, Ill., in the non-touring UMP DIRTcar Series event. | Slideshow | Video

McCreadie was the only driver in the 23-car field to use the LM-20s on all four corners, but in competing for the first time at Tri-City, he thought it was a "no-brainer" after watching preliminary events. He realized drivers more experienced at Tri-City likely anticipated using harder compounds they'd commonly use.

"I guess never being here probably helped," McCreadie said. "It looked to me all night long it was really wet."

Making the most of moisture down low, McCreadie went to work immediately on front-row starters Moyer and Feger, winning a three-wide battle and taking the lead on the 10th lap.

Babb moved into second and made a couple of stabs at McCreadie on the high side, once pulling alongside McCreadie, but he couldn't make the pass.

"The bottom was so good, and Timmy was so good down there, it was going to be tough to beat him," Babb said.

Notes: McCreadie's Rocket Chassis is sponsored by Sweeteners Plus. ... Scott Weber was piloting the Randy Korte-owned No. 00. ... Ken Schrader won the night's modified feature; the division drew 48 cars. ... Next up for Tri-City is three straight nights of Monster Midwest Tour action for Late Models on Sept. 23-25. Each night pays $2,000 to the feature winner.