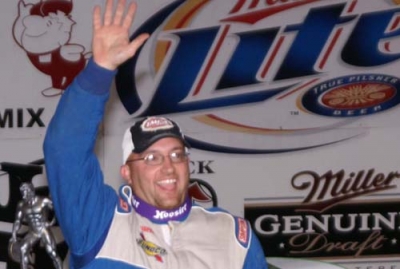 Frankel topped the first of five heats Friday at 34 Raceway to earn the inside front row start when the green flag flies in Sunday's $10,000-to-win event on the IMCA Late Model tour. The main event was originally scheduled for Saturday but postponed by rain. | Pepsi USA Nationals rained out

Nate Beuseling, Lonnie Bailey, Boone McLaughlin and Andy Eckrich were also heat winners and will line up in the second through fifth spots. Runners-up from the heats will start in positions six through 10 and third place finishers are in the 11th through 15th spots.

Three drivers advance from each of two 20-lap consolation races on Sunday. Five provisional starters will complete the 26-car grid, including the non-qualified driver with Friday’s fast time, the hard charger from heat and consies, top two non-qualifiers based on series point standings and a track provisional. Denny Woodworth posted Friday’s fast time.

A minimum of $500 will be paid to start the 100 lap main event, with another $2,000 in lap money going to the first four drivers scored each circuit.

Criss collected $750 for his flag to flag run at the front of the J & J Steel Ironman Challenge for drivers with perfect attendance through the first 15 events of the series.

Fifty one Late Models were in the pits for the traditional tour finale at West Burlington, upping the average car count per event to 42.25 cars this season. That’s the second highest average in series history, behind only the 42.33 mark for 15 events in 2000.