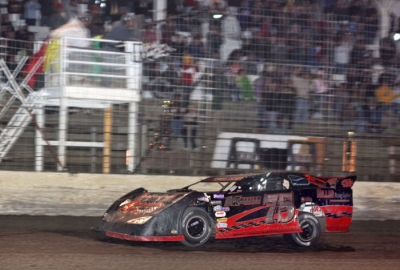 The 25-year-old Skytland regained the lead from Steve Laursen of Cumberland, Wis., heading for the white flag Sunday at River Cities Speedway to capture the fourth annual John Seitz Memorial. The seventh-year Late Model driver earned $9,200 and the honor of winning a 92-lap race named for a late driver he raced with coming up in the division. | Slideshow

"He helped me a lot and I followed him around the track and learned a lot from him," Skytland said of Seitz. "So winning this race means a lot to me."

Laursen, who took the lead from Skytland shortly after a mid-race fuel stop, settled for second in an event that drew a race-record 57 Late Models. Jake Redetzke of Eau Claire, Wis., rallied after a mid-race tire change to finish third while 20th-starting Marshall Fegers of Mound, Minn., took the fourth spot from his older brother Justin Fegers late in the race.

Skytland took the lead from Seckerson on the eighth lap and controlled most of the race, but Laursen found traction in the low groove on a restart after the halfway fuel stop and grabbed the lead.

Skytland stayed with the leader and plotted making a high-side move in the final laps. But he ended up driving underneath Laursen exiting turn four to lead the last two laps.

"He actually drove in and slipped up out of the and opened the door for me," said Skytland, who ran the high side much of the race and remember brushing the wall a half-dozen times. "It wasn't the way I anticipated it happening. I was expecting to have to go around him."

The victory was Skytland's fourth of a memorable season for the 2009 Northern LateModel Racing Association champion.

"It's just been a great year for me," Skytland said. "This is pretty much the icing on the cake."

Notes: Skytland's Jake Bitker-owned MasterSbilt Race Car has a Millar Racing Engine (also a sponsor) and sponsorship from Keizer Aluminum Wheels and Performance Auto. ... Skytland was celebrating his two-year anniversary of driving for Bitker. ... Skytland led 39 of 40 laps in River Cities Speedway's previous September special, the Harvest Bowl, but broke and lost to Laursen. "He told me this was a little payback," Skytland said. ... The weekend's racing schedule was pushed back a day by rain. ... The race was 92 laps in honor of John Seitz's car number. ... Every feature starter earned at least $920 in one of the upper Midwest's richest purses of the season. ... The race had the most laps in track history ... The car count was also record-setting. ... Mike Nutzmann's 24th-to-sixth run gave him hard charger honors. He actually fell a lap down early and got back onto the lead lap. ... Among drivers failing to make the feature: Jeff Provinzino, Dave Tyrchniewicz, Troy Schill, Tom Waseleski, Dave Zimmerman, Paul Mueller and Tom Corcoran