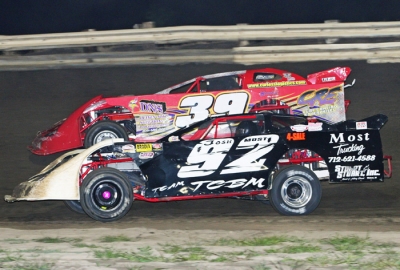 Josh Most rallies to the front. (Barry Johnson)

Josh Most had fans at Lee County Speedway on their feet for the final circuits of Saturday’s Deery Brothers Summer Series feature, catching race-long leader Jason Perry coming out of the final turn and pulling ahead to take the $2,000 by inches when the front pair reached the flagstand. | Slideshow

Most had to pass more than his fair share of IMCA Late Model tour foes over the course of the 35 lapper. He’d started 15th after qualifying from his consolation races, went to the pits on lap six after mistakenly thinking he’d cut a tire and had to restart at the back of the pack.

Flying through the field, he took second from Rob Toland with three laps to go and was just a car length back when Perry got the white flag.

The win was Most’s Deery career second. Perry’s runner-up showing was the best finish of his brief series career.

Rounding out the top five were Toland, Justin Reed and Jeff Aikey. Point leader Ray Guss Jr. was 10th and can clinch the series crown by taking a green flag in his heat race in the Monday, Sept. 6 IMCA Speedway Motors Super Nationals show at Boone Speedway.

Tyler Bruening drew the pole but the third starting Perry was in front when the first lap was scored. He’d stay there following a series of early restarts, putting some distance on the rest of the field as Toland and Aikey went back and forth over second.

Most, meanwhile, picked off cars one and two as a time as he worked his way up from the back. The final caution came on lap 23 and it was obvious when he drove by Toland that Most would be a factor at the finish.

After reeling in Perry, Most went to the extreme high line on the final turn, getting just enough momentum to beat Perry to the stripe.

Terry Neal moved up 12 spots and Tom Darbyshire advanced 13 positions in running sixth and seventh, respectively. Provisional starter Charlie McKenna was a plus 10 on the night, finishing 12th.

A dozen of the 15 drivers eligible for the “Drive For Five” payday qualified for the feature. Toland came closest to collecting what would have been a $3,000 bonus by finishing third. Drivers who missed no more than one of the regular point races at Donnellson this season were in the running for $5,000 to win Saturday evening.