By Mike Norris and Matt Curl 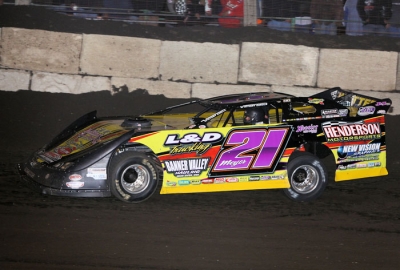 The polesitter Moyer of Batesville, Ark., led the first 26 laps before Erb, of Carpentersville, Ill., took command through the middle stages of the 60-lapper. But Moyer went back ahead with 12 laps remaining to secure the victory in Fairbury's season-ending event.

Erb settled for second four lengths back with Brian Shirley of Chatham, Ill. — winner of Friday's tuneup event at Fairbury — in third. Shannon Babb of Moweaqua, Ill., rallied from his 17th starting spot for fourth and Kevin Weaver of nearby Gibson City, Ill., rounded out the top five.

Moyer jumped to an early lead and hit lapped traffic after just seven circuits while the fifth-starting Erb worked his way forward in the early laps.

Erb got rolling on the restart, running side by side with Moyer for a few laps before officially taking the point on lap 27. He stretched his lead to a half-straightaway midway through the event, but a lap-46 caution bunched the field after Frank Heckenast Jr. of Orland Park, Ill., hit the frontstretch wall; his car was towed from the track.

On the restart, Moyer uses the high groove to go back ahead exiting turn two to lead lap 49. A caution for debris a lap later gave Erb a chance to answer on the restart, But Moyer extended his lead and held on after a final caution on lap 54.

Notes: Moyer's Victory Circle Chassis has a Clements powerplant and sponsorship from Banner Valley Hauling and L&D Trucking. ... The track drew a capacity crowd and welcomed more than 150 campers. ... Ninth-starting Rodney Melvin was up to third ate in the race but his car suffered damage in a battle with Brian Shirley. ... Among drivers failing to make the main event: Derek Chandler, Brandon Sheppard, Steve Lance Jr., Rick Standridge, Steve Thorsten, Brandon Thirlby and inaugural race winner Snooky Dehm. ... The event wraps up the 2010 season at Fairbury.