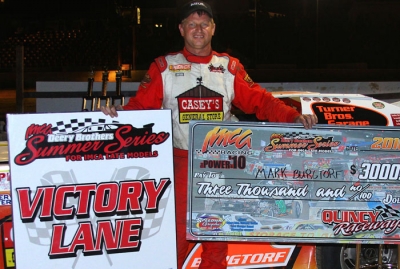 Burgtorf’s green to checkers run at the front of the rescheduled Titan Wheel and Tire special paid $3,000. The tour victory was his career ninth at Quincy and 26th overall, second on the all-time Deery list to Jeff Aikey’s 54. Point leader Ray Guss Jr. challenged briefly but settled for second. Denny Woodworth, Rob Toland and Mark Preston rounded out the top five in a race postponed by rain in June.

Burgtorf drew the outside front row start and led through five cautions that slowed the first half of the race. Guss moved up from fifth starting and made his try just after midway, but that bid fell short and Burgtorf kept the door shut the rest of the way.

Toland qualified from a consolation race flew into the top four after being involved in one of the early yellows and restarting at the rear. T.J. Criss took a provisional and also capitalized on the 15 lap green flag session that ended the feature, advancing 13 positions.