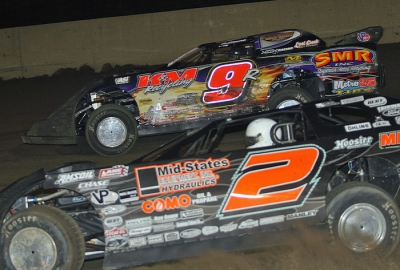 HARTFORD, Mich. (Aug. 27) — Storming to the front from his 19th starting spot, Brady Smith of Solon Springs, Wis., made his first visit to Hartford Motor Speedway a winning one. Smith overtook fifth-starting Curtis Roberts of Coleman, Mich., on the 22nd lap and never looked back in capturing the Lane 46 at the big half-mile oval. | Slideshow

Smith's first career Sunoco American Late Model Series victory in a rare series start paid $4,600 for the winner's purse and more than $1,100 in lap money in a crash-filled main event.

The night was married by ALMS points leader Brian Ruhlman's wild lap-two crash that saw his No. 49 end up atop the guardrail inside turn three. He finished last in the 26-car field.

Third-starting Jeep Van Wormer of Pinconning, Mich., took the lead from Volk on the second lap and was in control through the 10th lap, but nosepiece damage to his No. 55 forced him pitside for repairs.

With Roberts out front for the lap-10 restart, a massive backstretch pileup brought out the second red flag of the event as six cars were damaged and four retired.

After the race got rolling again, Smith was on the move and tracked down Roberts, taking command just before the halfway point and leading the rest of the way in an event where just 10 cars were running at the finish.

Notes: Smith's Big Red Motorsports Bloomquist Race Car is powered by a Vic Hill Racing Engine and sponsored by Mid-States Equipment, Michaletz Trucking, and Gotta Race. ... Smith was coming off a fifth-place finish in Sunday's Comp Cams Topless 100 in Batesville, Ark. ... It marked Smith's second victory of the season; his first came in World of Outlaws Late Model Series action on Feb. 13 at Volusia Speedway Park in Barberville, Fla. ... The event, in honor of Lane Automotive's 46th anniversary, was presented by K&N Filters. ... The event, a makeup of a July 23 rainout, is among the most lucrative on the ALMS circuit with $46 for every lap led and at least $460 to all 26 starters. ... Rusty Schlenk drove Donnie Marcoullier's No. 6 in the heat race, then piloted Alan Gendusa's car in the main event. ... Gendusa was among drivers failing to make the feature along with Larry Arndt, Chris Nash, Kevin Weaver and Don Mihelich. ... Just three events remain on the ALMS schedule starting with a Sept. 4 event at Oakshade Raceway in Wauseon, Ohio.