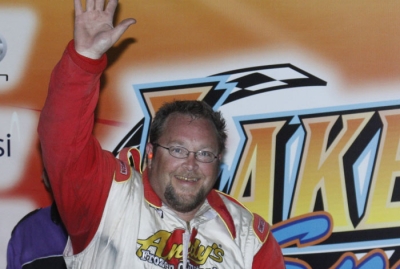 ELDON, Mo. (Aug. 7) — Terry Phillips of Springfield, Mo., completed a sweep of the MARS DIRTcar Series weekend Saturday at Lake Ozark Speedway, leading all 35 laps for his series-leading seventh victory of 2010. Phillips added the $3,000 payday to the $3,000 he won the previous night at Tri-City Speedway in Granite City, Ill., another track promoter by Kevin and Tammy Gundaker. | Slideshow

Mark Burgtorf of Quincy, Ill., started fourth and made a few challenges on Phillips but settled for second while eighth-starting Brandon McCormick of Lebanon, Mo., rallied from his fourth-row starting spot to finish third, his best of the season. Al Purkey of Coffeyville, Kan., made a 13th-to-fourth run despite losing a cylinder before the race, and Jeremy Payne of Springfield rounded out the top five.