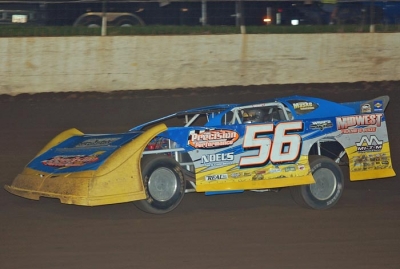 Andy Eckrich ran away from the rest of the IMCA Late Model tour feature field, leading the last 43 of 50 circuits. Runner-up Terry Neal was half a lap off the pace when Eckrich crossed the stripe. | Slideshow

Eckrich already owned a pair of second place finishes in main event starts and was the top rookie in series standings heading into the Tornado Tuesday program.

Aikey, winner of the last Deery race at Farley, in 2003, started on the pole and ran in front as cautions slowed the first seven laps.

Eckrich took over from the point, dealing with a myriad of cautions that finally came to an end on lap 36. The race ran green the rest of the way but Eckrich was clearly in a class by himself, winning handily.

McKenna had to start his drive toward the front twice, first from the initial green flag and then after advancing to midpack, being involved in a caution and then restarting in the rear.

Blum started outside row one, exited early with two rear flats, then raced his way back to fifth and eventually settled for seventh place pay.

Rauen made an even more impressive charge after making an early bid for the lead, then driving off with a broken left rear wheel.

He tagged the back of the back and rocketed to second before being kayoed for good by a cut tire.