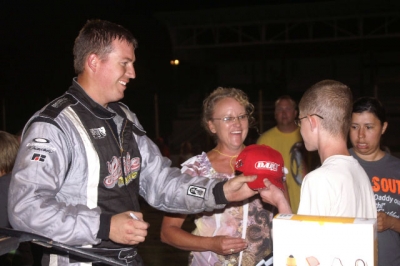 COLUMBUS JUNCTION, Iowa (July 29) — Series points leader Chad Simpson of Mount Vernon, Iowa, led flag-to-flag Thursday at C.J. Speedway for his series-leading eighth victory of the season on the Dart Corn Belt Clash. Simpson, who started outside the front row, earned $2,000 for his victory in the 11th series event of 2010.

Brian Harris of Davenport, Iowa started in the fourth row and raced up to second. But as he was reeling in Simpson, he caught the frontstretch wall on the 14th lap and eventually retired.

The next series event is scheduled for Aug. 13 at Chateau Raceway in Lansing, Minn.