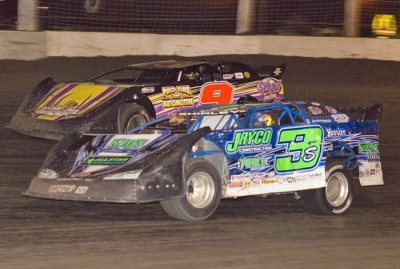 LINCOLN, Ill. (July 25) — UMP DIRTcar Summernationals champion Jason Feger of Bloomington, Ill., added to his series winnings Sunday afternoon at Lincoln Speedway with a victory in the makeup of the event rained out July 4. Feger, crowned champion of the 29-race tour nine days earlier, rallied from his ninth starting spot at the quarter-mile oval for a $5,000 victory in the 40-lapper.

Outside front-row starter Brian Shirley of Chatham, Ill., was second followed by eighth-starting Eric Smith of Bloomington. Jason McBride of Carbondale, Ill., was fourth and 12th-starting Michael Kloos of Trenton, Ill., rounded out the top five. Fifteen of 21 scheduled starters returned for the event halted by rain after a single lap on the Fourth of July.

After earning $2,500 for his runner-up finish in the Summernationals feature, Shirley earned another $2,000 for a Monster Midwest Series victory in the nightcap of the Sunday doubleheader. Shirley reversed the finishing order of the afternoon event by outrunning Feger and stretching his MMS points lead.