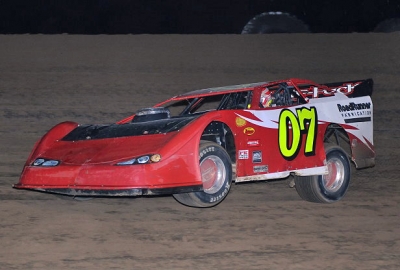 Boen, a four-time NCRA champion and current points leader, earned $2,500 for his 51st career series in a race scheduled for 25 laps. Al Purkey of Coffeyville, Kan., finished second after taking the spot from Alan Vaughn of Belton, Mo., on lap 20. Vaughn, outside front-row starter J.D. Hubert of Cross Timbers, Mo., and Eric Turner of Springfield, Mo., rounded out the top five.

Boen jumped into the early lead ahead of Terry Phillips, setting sail and grabbing a half-straightaway lead by the sixth lap over Vaughn and Phillips.

Ninth-starting John Anderson of Omaha, Neb., worked past Phillips near the midway point for third and set his sights on Vaughn before a lap-14 caution for a stalled Jeremy Payne.

On the restart, Boen again motored away and had another half-straightaway margin before Anderson shredded a tire on the 19th lap, knocking him from contention.

On the next restart, Purkey worked past Vaughn by lap 20, but a lap-22 caution appeared when Jason O’Brien stopped in turn two. The skies opened up before the race could resume and the event was declared official.

Notes: Boen’s Rocket Chassis is sponsored by Roadrunner Fabrication and Peterson Fluid Systems. ... Boen has NCRA victories at 10 tracks. ... NCRA’s only other visit to Thunderhill came for a doubleheader in October 2008 with Jesse Stovall of Galena, Mo., sweeping both features. ... Next up for NCRA competitors are July 31-Aug. 1 weekend events at Dodge City (Kan.) Raceway Park and 81 Speedway in Park City, Kan.