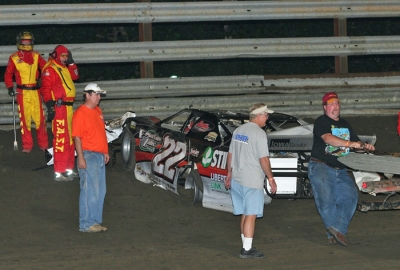 OSKALOOSA, Iowa (July 21) — A long run at the front Wednesday night led to the third Deery Brothers Summer Series win of the season for Ray Guss Jr of Milan, Ill. Guss led the last 25 times around the track in the 35-lapper at Southern Iowa Speedway, pulling away from persistent Andy Eckrich of Iowa City, Iowa, following a late restart to earn the $2,000 top prize and add to his lead in point standings for the IMCA Late Model tour. | Slideshow

Iowans Jay Johnson of West Burlington, Terry Neal of Ely and Jeremiah Hurst of Dubuque rounded out the top five in the midweek show at the half-mile oval during the Mahaska County Fair.

Charlie McKenna of Clear Lake, Iowa, enjoyed one of the fastest rides not on the midway, leading the first 10 circuits from his outside front row starting spot. Two of the six cautions that slowed the contest came during McKenna’s turn at the point, but he stayed in control both times the green flag came back out.

The sixth-starting Guss gradually reeled McKenna in, making an inside move in turn four to take the lead away and running at the head of the pack the rest of the way.

Eckrich and McKenna traded the second spot much of that distance, but their entertaining battle came to an end on lap 32 when McKenna’s right rear wheel broke, sending him hard into the turn-three wall and bringing out the red flag.

McKenna wasn’t injured, though his ride sustained considerable damage. Eckrich tried an inside approach of his own and pulled alongside Guss after the restart, but was rebuffed and wound up second, some six lengths behind the winner.

Notes: Guss drove a Hershel Roberts-owned MasterSbilt Race Car is powered by a Mullins Engine and sponsored by Sears Seating, Roberts Custom Software and Roemer Machine & Welding ... Guss now owns 19 series victories, tied with Rob Toland for fifth on the all-time list. ... Andy Eckrich’s second-place finish matched his career-best showing. He’d also chased Guss to the checkers at Davenport Speedway in April. ... Mark Burgtorf of Quincy, Ill., the only other three-time winner on the circuit this year, had engine problems in his heat race and scratched for the night; he’s second in the standings, 55 points off the pace of Guss. Eckrich is another nine points back. .... The 10th of 16 series events is scheduled for July 28 at Knoxville (Iowa) Raceway.