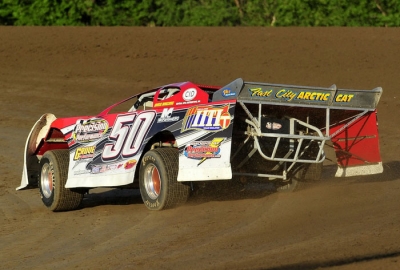 Boen, who earned $2,500 in the previous night’s tuneup feature, settled for second with former track champion Kyle Berck of Marquette, Neb., in third. Travis Dickes of Madison, Neb., and Delbert Smith of Wichita, Kan., rounded out the top five.

Boen took the lead from outside the front row while Berck and Eckrich joined him in a three-car breakaway from the field. Slowed briefly by a lap-12 caution, the trio lapped up to 10th place by the midpoint of the 40-lapper.

After a lap-32 caution for a stalled Al Humphrey of Giltner, Neb., Berck pressured Boen in the low groove and Eckrich decided to try the high side at the 3/8-mile oval. Nearly slipping off the track, Eckrich kept enough momentum down the backstretch to breeze into the lead on lap 34. He led the rest of the way.

In Friday’s weekend-opening feature, Boen took the lead from Berck on the seventh lap after the frontrunners banged together in turn two, flattening a tire on Berck’s car. Eckrich was third while Smith, 11th-starting Corey Zeitner and Berck rounded out the top five.