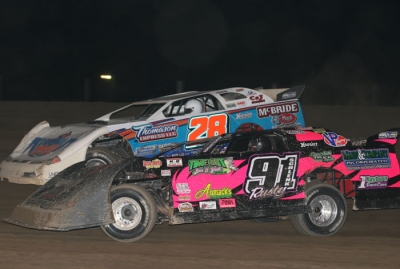 WAUSEON, Ohio (July 17) — When former Oakshade Raceway champion Rusty Schlenk saw announcer Scott Hammer walking through the pits Saturday evening with an oversized $10,000 check, he had a question: “Is that for me?”

There was no question a few hours later it was indeed for Schlenk as the 23-year-old driver overtook Dennis Erb Jr. just before the halfway point of the 60-lap UMP DIRTcar Summernationals finale and dominated the rest of the way for a career-high payday. Schlenk built nearly a half-track margin on the field in winning his second Summernationals victory in four days, following Wednesday’s triumph at Kokomo (Ind.) Speedway. | Complete Summernationals coverage

“Aw man, I never thought of half-trackin’ these guys. ... Everybody kept telling me, ‘I want you to spank ‘em.’ I told ‘em if I win it by a foot I’ll be happy,” Schlenk said in victory lane. “I’m kind of glad I built up a lead there, because the car fell off a little bit at the end. I don’t know if I was running it too hard or what was going on, but I’m glad I built up that kind of lead so we were there at the end.”

Schlenk’s lead also kept him from being involved in a wild scramble for position that saw a pack of five cars dueling for the second spot in the second half of the race. Ninth-starting Jack Sullivan of Greenbrier, Ark., rose to the top of that heap in the final 15 laps, edging 14th-starting Ryan Unzicker of El Paso, Ill., while the outside front-row starter Erb, of Carpentersville, Ill., didn’t fall far behind in finishing fourth.

Fifth-finishing Donnie Moran of Dresden, Ohio, stayed in the mix most of the way while Jeep Van Wormer of Pinconning, Mich., came from 19th to finish sixth. Polesitter Doug Drown of Wooster, Ohio, was in the top five until the final laps and settled for seventh.

Jason Feger of Bloomington, Ill., who officially picked up the $25,000 Summernationals championship after clinching it the previous night at Attica (Ohio) Raceway Park, started 10th and got up to fourth by lap 23, but he eventually faded to finish ninth. He joined Schlenk in victory lane and Schlenk walked over for a congratulatory handshake.

“I gotta say thanks to all my guys,” Schlenk said. “They worked their butts off tonight getting this thing ready. I’ve been pacing around this place trying to figure out what to do to the car, and we got it right.”

At the outset of the main event, it was a two-car breakaway for Erb and the fourth-starting Schlenk in the first half of the race as they edged away from Drown in waging a tight battle for the top spot. Schlenk finally got under Erb before the halfway point, and the field was reset on lap 31 when Jon Henry of Ada, Ohio — who ran as high as fifth — was sidelined after clipping an infield tire barrier and tucking his car’s nosepiece under the front wheels.

Schlenk was ready for an onslaught on what turned out to be the race’s lone restart.

Sullivan and Unzicker were in fact coming through the field, but Schlenk was so fast that by the time Sullivan was up to second in the final 15 laps, all he saw was clear racetrack ahead of him.

“I was wondering where the leader was,” Sullivan said, "because I sure couldn’t see him.”

That was because Schlenk had run off and hid from the field, leaving Sullivan and Unzicker left to duke it out with the rest of the drivers vainly chasing the winner.

Schlenk’s three-race stretch to wrap up the Summernationals was marred only by a frustrating night on Friday at Attica when ignition woes kept him from turning a single competitive lap.

“I kind of wish we could’ve run last night, because I think we’d have had a shot at that one, too. We’re pretty good at Attica ... Oakshade and Attica, they’re my home tracks, so it was kind of a bummer I didn’t get to run with ‘em last night. But I can’t complain — you can’t win ‘em all, right?”

Notes: Schlenk’s Rayburn Race Car is powered by a Kirchner Race Engines and sponsored by Micro Armor, Time Out Bar & Grill and Main & Company. ... While Schlenk had success on the Summernationals tour, is main goal is the overall UMP points title. He’s lead those weekly points virtually all season. ... Sixth-starting Curtis Roberts ran a close third early in the race, but he faded from contention and retired his smoking car at the lap-31 caution. ... The event completes the 28-race tour, the most-ever points races in series history.

Curtis Roberts of Coleman, Mich., is starting sixth in the main event. Last night at Attica (Ohio) Raceway Park, Roberts couldn’t get his car to fire for the main event and the team discovered a faulty battery. Did he change the battery for Oakshade? “You know we did,” Roberts said. ... Jon Henry has won six of his last eight visits to Oakshade and starts fifth in the main event alongside Roberts. He’s looking for a little guidance on tires, though, because he said he normally runs four Hoosier LM-20s — the softest tires allowed in the Summernationals — in weekly features. He’s pretty sure they wouldn’t last 60 laps, but he’s not sure what combination he’s going to go with. “I’m dumb on tires,” said the youngster who first ran a Late Model at this event two summers ago. “I just bought a groover the other day,” he said, adding that he learned about grooving and siping tires last month at Eldora’s Dream while pitted next to Dale McDowell and Jared Landers. ... Polesitter Doug Drown has had some overheating issues and hopes his car can last the 60 laps without problems. “We cleaned the radiator up and opened the vents, so we’ll see how it goes,” he said. Drown had some electrical issues that were cleared up when he borrowed a battery from Jeep Van Wormer, and he wonders if that might solve the overheating issues, too. ... Van Wormer is line for the series provisional while Brandon Sheppard is in line for the provisional based on UMP’s ’09 points. ... Kevin Reeve got the track provisional.

Polesitter Devin Shiels led all the way in the 12-lapper, turning back a late challenge from fourth-starting Ryan Unzicker for the victory. They transferred to the main event along with fifth-starting Brad Eitniear, 14th-starting Casey Noonan, 10th-starting Rick Delong and sixth-starting Kris Patterson. Australian driver Jamie Oldfield, piloting Jeep Van Wormer's backup car, ran second early in the race and held the fourth spot when he fell to the infield with transmission problems.

In the redraw among heat winners, fast qualifier Doug Drown got the pole position with Dennis Erb Jr. alongside. The second row is made up of Donnie Moran and Rusty Schlenk with Jon Henry and Curtis Roberts in the third row.

Chris Keller and Casey Noonan captured C-Mains to transfer to the B-Main. Runners-up Tom Ordway and Dusty Moore also head to the B-Main.

The top six finishers transfer to the main event:

Polesitter Curtis Roberts won an early, groove-swapping battle with fellow front-row starter Russ King and edged away for an easy victory in the 10-lapper. King wrapped up the second and final transfer spot, comfortaby ahead of Kris Patterson and Steve Kester. No cautions slowed the action.

Winning a two-car breakaway, polesitter Donnie Moran led fellow front-row starter all the way in the 10-lap heat. Both transferred to the main event with Miller finishing a half-straight behind the winner. Brad Eitniear was third ahead of Mike Bores. Eitniear spun in turn one on the first green, requiring a complete restart.

Outside front-row starter Jon Henry got the edge on polesitter Jason Feger at the outset and held on for a 10-lap victory. Feger tried to use the high side to reel in Henry, but fell short in settling for the second and final transfer spot. Ryan Unzicker was third with Rick Delong in fourth in the caution-free affair.

Third-starting Rusty Schlenk slung around the outside of Jack Sullivan exiting turn two on the fourth lap and cruised to victory in the 10-lapper. Sullivan, who started outside the front row and led early, settled for the second and final transfer spot. Jamie Oldfield, the Australian driver piloting Jeep Van Wormer's backup car, was third and polesitter Scott Schmitt was fourth. They'll go to the B-Main after the caution-free prelim

Fast qualiifer Doug Drown fought off challenges from Shannon Babb and raced to victory. Babb was second for the other feature transfer spot while Andrew Reaume and tail-starting Brandon Sheppard were third and fourth and will head to the B-Main. Outside front-row starter Dusty Moore slipped over the banking between turns one and two on the second lap and fell from contention. Zac Davis suffered damage from contact with Dusty Moore and dropped out of the race.

Polesitter Dennis Erb Jr. pulled away to an easy victory with third-starting Brian Ruhlman in the second spot, a straightaway back. Those two drivers transferred to the main event. Fifth-starting Jeep Van Wormer dropped to the infield midway through the race; he was towed to the pits after the race.

Doug Drown of Wooster, Ohio, was fastest among a series-high 58 cars Saturday at Oakshade Raceway for the finale of the UMP DIRTcar Summernationals tour. Drown’s lap of 14.991 seconds at the 3/8-mile oval puts him on the pole for the second heat race.

With Feger of Bloomington, Ill., wrapping up the championship on Friday at Attica (Ohio) Raceway Park, dethroning three-time champion Erb, there's no title drama but they'll be plenty of action at Oakshade.

Casey Noonan spun in turn two on his qualifying lap.. ... Feger has a series-best stretch of nine-straight top-five finishes. ... The 28th series event marks the most-ever completed Summernationals points races. The previous high was 26 in 2005. ... The stretch of 18 straight days of features was the second-most in series history going back to the 21-day stretch in 2000. ... Australian ace Jamie Oldfield of Perth, who has been serving as a crew member on Jeep Van Wormer’s crew during the Summernationals, is driving Van Wormer’s backup car at Oakshade. ... He joins fellow Perth driver Craig Vosbergen on the entry list. ... The lone non-points Summernationals race will be July 25, a makeup of the July 4 Lincoln (Ill.) Speedway rainout.