Feger wraps up UMP title with domination at Attica 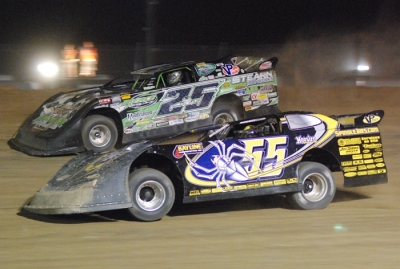 The 32-year-old driver from Bloomington, Ill., dominated the first-ever series visit to Attica’s third-mile oval, repelling a few challenges from Jeep Van Wormer of Pinconning, Mich., on restarts and building leads of as much as a quarter-lap.

After patiently working traffic in the final laps, Feger pumped his left fist out the driver’s side window in taking the checkers, then climbed atop his No. 25 in victory lane, screaming with satisfcation and no doubt relief after 27 of 28 grueling series events in dethroning three-time series champion Dennis Erb Jr.

“It sure feels good to finally dethrone that guy," Feger said. "This is definitely a tough deal and he’s a really tough competitor. If you’re going to do it that’s the way to do it right there. It's an awesome deal. It will be nice going into tomorrow without any pressure and just try to win a race and have a little fun.”

Van Wormer, who started sixth, finished second while third-starting Matt Miller of Waterville, Ohio, was third. Erb rallied from 15th to finish fourth was 19th-starting Jason McBride of Carbondale, Ill., was fifth for his best series finish of 2010.

Polesitter Brian Ruhlman of Clarklake, Mich., who started alongside Feger, faded to finish sixth while Jon Henry of Ada, Ohio, who started 16th and worked his way up to fourth after just seven laps, dropped back to 11th in the final rundown

Four cautions slowed the first half of the race, the most serious for a turn-three scramble involving Brandon Sheppard, Keith Berner, Jeff Babcock and Donnie Moran in turn two (Moran retired with a broken nosepiece). Other cautions were for drivers slipping over the banking at the wall-free track: Larry Kingseed in turn three on the seventh lap, Kingseed again in turn one on lap 15 and finally for Babcock in turn two just before the halfway point.

The last half of the 40-lapper ran stayed under green as Feger fought off a brief challenge from Van Wormer and quickly pulled out to a straightaway lead that he turned into a quarter-track margin by lap 30. Van Wormer closed a bit as Feger worked through lapped traffic, but the outcome was never in doubt.

“I slid off the top there a little bit with two to go,” Feger said. "I could see my brother on top the hauler telling me how much of a lead I had so I didn’t get too nervous and push it too hard. The top groove was definitely the spot to be and that’s where we’re the best at anyway.”

Notes: Feger’s Pierce Race Car has a Rhyne Automotive Engine and sponsorship from Pro Tire Automotive, Advanced Racing Suspensions, Stern Ironworks and Jaxon Chase Steel Detailing. ... Feger’s two victories (he also won the previous Friday at Tri-City Speedway in Granite City, Ill.) are the fewest for a champion since Billy Moyer won a single event in 2003. ... Jason McBride has posted his best two series finishes in the last two events. ... Curtis Roberts scratched when his car lost fire before the race began; the crew later discovered a faulty battery. ... Promoter John Bores raced in the feature but wasn’t scored. ... Doug Drown was running seventh but pulled out midway through the feature. ... Jon Henry advanced 12 positions up to fourth, but he lost the fifth spot on lap 24 when he got too high exiting turn two and dropped out of the top 10. ... Saturday’s 60-lapper at Oakshade pays $10,000 to the winner.

Outside front-row starter Shannon Babb led all the way, surviving a bump from Devin Shiels on an early restart and cruising to victory. The low-running Shiels later gave up the second spot ro Ryan Unzicker, who worked the high groove and took the spot for good on lap 10. Shiels was third, missing a transfer spot while C-Main winner Rick Delong rallied from 14th to finish fourth. Jason McBride was fifth but he'll get the series provisional for the main event. The other provisional starter is Dusty Moore. Five cautions slowed the action, the most serious one on the fifth lap when Casey Noonan and Wayne Maffett Jr. tangled on the backstretch, collecting Dan Wallace. Polesitter Jeremy Canada slipped over the turn-two banking while running third early in the race; Moore slid over the turn-four banking a lap later as Ryan Markham slowed, and Rocky Owens spun in turn two on an early restart.

In a redraw among heat winner, Brian Ruhlman drew the pole with Jason Feger alongside. Matt Miller and Ryan Missler make up the second row. ... Missler’s team is anxiously working on the powerplant in his No. 50y after engine problems cropped up in his dominating heat race victory. “Lap eight it made a couple of pops and then it was down on power, running on seven cylinders,” Missler said. “We don’t know if it’s a bad spark plug or internal.” ... Rusty Schlenk came to one of his better tracks fresh off a Summernationals victory on Wednesday at Kokomo, Ind., but he never took a competitive lap at Attica. After qualifying fourth best in his group, problems with his car’s MSD ignition box kept him out of his heat race. The team broke a wire off in the scramble to make repairs and couldn’t get it fixed in time to run his C-main. Because he didn’t compete in a preliminary race, he’s not eligible for the ’09 UMP points provisional, which he would’ve received. ... In the scramble in the second heat race, polesitter Jack Sullivan’s car got banged up in contact with a high-running Brandon Sheppard. Sullivan, who dropped to fourth from first in the final laps of the heat, broke a right-front upper control arm that hampered his car’s steering and handling. Repairs should be made before the main event. ... Larry Kingseed gets the track provisional. ... The World of Outlaws Late Model Series visits Attica on July 30. ... Shannon Babb and Ryan Unzicker are in line for provisionals, but they've lined up for the B-Main.

Mike Bores won the first C-Main over Rocky Owens while RIck Delong won the second C-Main over Mark Frazier. All four drivers will transfer to the B-Main.

The top two finishers go to the feature; the last two rows are made up of C-Main transferrees:

Outside front-row starter Jason Feger, closing in on his first Summernationals crown, led all 10 laps of the final heat. Third-starting Doug Drown was right on Feger's deck on the third lap, but he slipped slightly over the turn-one banking midway through the race and could never get as close until a lap-seven caution for debris. While Feger pulled away, Drown had his hands full with Curtis Roberts and ninth-starting Jon Henry over the last three laps in a position-swapping duel. Drown got second followed by Roberts and final transferree Henry. Polesitter Ryan Unzicker ended up fifth.

Polesitter Matt Miller led all the way in the 10-lapper, keeping Russ King at bay over the final laps. King got second. Seventh-starting Donnie Moran rallied to finish third while Dennis Erb Jr. got the fourth and final transfer spot. Devin Shiels, a surprising second-place finisher in the Summernationals visit to I-96 Speedway, was further back in fifth. Third-starting Craig Vosbergen got into the frontstretch wall exiting turn four on the fourth lap and pulled to the pits after drawing a caution. Wednesday's Kokomo Summernationals winner Rusty Schlenk didn't start the race.

Spurting ahead out of a four-wide battle for the lead on the seventh lap, outside front-row starter Brian Ruhlman grabbed a dramatic victory in the second 10-lapper. One of the best heat races of the entire Summernationals saw polesitter Jack Sullivan control the first six laps, but he was swallowed by high-running Brandon Sheppard, Ruhlman and tail-starting Jeep Van Wormer out of turn four with three laps remaining. Ruhlman held off a late charge from Van Wormer, who switched to a backup car after breaking a rear end in time trials. Sheppard was third and Sullivan got the fourth and final transfer spot, barely holding off Shannon Babb. The 10-lapper's one caution appeared on the third lap when Nate Potts slipped over the turn-four banking.

Polesitter Ryan Missler jumped out to an early lead and cruised to victory. Missler had a full-straightaway margin after five laps and stretched it the rest of the way in the caution-free 10-lapper. The battle behind Missler was a good one among fellow front-row starter Curtis Deisenroth, Jeremy Canada, Keith Berner and Jeff Babcock. who made a fifth-to-third move on the eighth lap. Deisenroth took second with Babcock third and Berner in the fourth and final transfer spot over Canada, who ran in the top four most of the way. Fourth-starting Jeff Esbenshade got sideways between turns three and four and fell from contention.

Ryan Unzicker of El Paso, Ill. was fastest among 50 qualifiers Friday at Attica Raceway Park for the 27th race on the month-long UMP DIRTcar Summernationals as the tour enters its final weekend. Unzicker’s 15.039-second lap on the third-mile oval puts him on the pole for the fourth heat.

The top four finishers in each of four heat races will transfer to the main event. Two finishers from each of two C-Mains transfer to the B-Main, which sends two drivers to the feature. Three provisional starters round out the starting field. The 40-lap feature pays $5,000 to the winner.

Jason Feger of Bloomington, Ill., has a chance to lock up his first Summernationals crown at Attica. He leads three-time champ Dennis Erb Jr. of Carpentersville, Ill., by 65 points and clinches the crown if he ends the night at least 46 points ahead. ... The event drew 50 Late Models, matching the high car count for the series way back on the June 16 opener at Brownstown (Ind.) Speedway. ... The Late Model track record at Attica of 14.345 second was set by Matt Miller in 2004. ... Rusty Schlenk, winner of Wednesday’s Summernationals event at Kokomo, Ind., is a three-time winner this year at Attica. ... Ryan Missler of Bellevue, Ohio, won last year’s UMP Late Model weekly championship at Attica and leads this year’s points. ... Fans got a pre-race show from a crop duster spraying corn just off the backstretch. ... Some Summernationals teams spent of Thursday’s day off riding roller coasters at Cedar Point Amusement Park in Sandusky, Ohio, including the teams of Jeep Van Wormer, Jason Feger, Ryan Unzicker and Donny Walden. ... Brandon Sheppard’s team spent the day off working on their equipment at Patrick Sheltra’s race shop in Richmond, Ind. The team blew a motor at Kokomo. “This isn’t really our slick track kind of car,” crew chief Jerry Patterson said, “but it’s all we’ve got.” ... The No. 11 Lawrence Motorsports entry, driven by Keith Berner, carries a message for another Keith to get well. Mike “Saus” Lawrence’s long-time crew member Keith Batty, 66, is at the Cleveland Clinic awaiting a heart transplant. Lawrence recently visited with Batty and spent an hour talking racing. ... Besides Late Models, 305 sprint cars and dirt trucks are in action. ... The first Late Model qualifying group is loaded with local drivers, virtually assuring the track getting some weekly drivers in the main event. All 13 drivers are Ohio-based. ... Michigan driver and series regular Brandon Thirlby has lost his mop-top after getting a haircut while at Patrick Sheltra's. "It started out as a trim," Thirlby said, but he ended up with a virtually shaved head. No word on whether he needed a smaller helmet. ... Nate Potts got into the wall between turns three and four on his qualifying lap. ... Jeep Van Wormer, coming off back-to-back 19th-place finishes, looks to be headed toward another tough night. He broke a rear end on his qualifying lap and didn’t record a time. The team scrambled after time trials to prepare a new rear end while simultaneously preparing the lapped car before decided which car to run in the heats. ... Track promoter John Bores is competing in the Late Model action as he does most weeks at Attica.