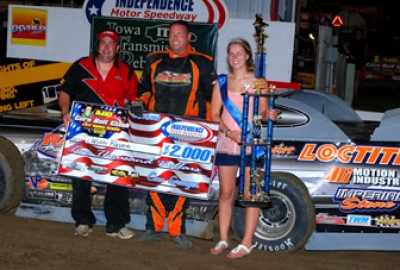 INDEPENDENCE, Iowa (July 14) — Jason Rauen of Farley, Iowa, overtook early leader Dave Eckrich of Oxford, Iowa, on the 10th lap and led the rest of the way Wednesday on a steamy night at Independence Motor Speedway. the 30-year-old Rauen earned $2,000 for his first victory on the 2-year-old Dart Corn Belt Clash circuit.

Eckrich faded to sixth after a caution with 10 laps remaining while Jason Utter of Columbus, Junction, Iowa, moved up to finish second. Hometown driver Curt Martin was third folowed by brothers Chad and Chris Simpson. Chad Simpson, of Mount Vernon, Iowa, leads the series points and lost for only the second time in nine series events.

Notes: Rauen's Roush Yates Engines-powered car is sponsored by Rauen Precision Machining, Loctite and Burco Farms & Tractor Sales. ... Terry Neal of Ely, Iowa, ran in the top five in the first half of the race but ended up 10th. ... The race was the only series event at Independence in 2010. ... Next up for the series is a $2,000-to-win event at Fayette County Speedway in West Union, Iowa, on July 27.