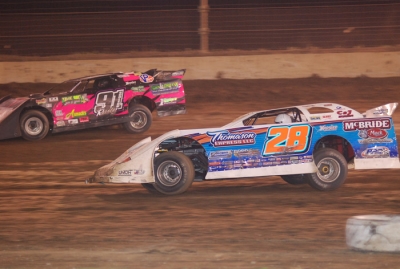 KOKOMO, Ind. (July 14) — Rusty Schlenk of Jackson, Mich., fought off a flurry of challengers over the final laps at Kokomo Speedway on Wednesday to capture his first career victory on the UMP DIRTcar Summernationals. Schlenk, who started outside the front row, led all 40 laps at the quarter-mile sprint-car stronghold to earn $5,000. | Complete Summernationals coverage

“I knew I had a shot at it tonight, but I never thought I’d win on the Summernationals this year. I’ve run five of them and had five DNFs so far,” said Schlenk, who is leading UMP’s weekly points chase. “We had all our stuff together tonight. We took a couple weeks off the Summernationals and I knew we had three tracks here we’re pretty good at coming up, the next two at Oakshade and Attica. I thought we had a shot at ‘em. I didn’t know we’d be winning here, but I’ll take this one.”

Schlenk led comfortably most of the way, building more than a half-straightaway lead on Feger several times. But after a lap-32 caution for Brandon Thirlby’s turn-four spin, Schlenk had his hands full first with Feger, then with seventh-starting Dennis Erb Jr., who worked the low groove to take the second spot on lap 35.

As if Feger and Erb weren’t enough, Shannon Babb — who restarted on the tail after a lap-six spin — flew into contention in the high groove, making it a four-car battle for the lead.

Schlenk had a few bobbles in his high groove but held on to finish a car length ahead of Erb, throwing his left fist into the air at the checkers.

“I saw (Erb) down there every lap. I was expecting somebody to come down there. I knew there were some people on (harder tires). I went soft and I knew there was a couple of people with hard stuff. ... so I knew those guys would be coming at the end,” said Schlenk, who turns 24 next week. “I knew the bottom was picking up, too, because the lapped cars started to get fast down there. I’m like, ‘Oh man, I better go to the bottom.’ But I set up too loose and had to run the cushion, but it worked out.”

Erb, of Carpentersville, Ill., finished second to shave 10 points off the 75-point lead that the series-leading Feger brought to Kokomo. Babb, of Moweaqua, Ill., was third with Feger of Bloomington, Ill., in fourth. Steve Casebolt of Richmond, Ind., ran third most of the way but ended up fifth.

Three cautions slowed the action, first for Babb’s spin then again on lap 13 for Jeep Van Wormer in turn one. Thirlby tried to make a 360-degree spin in turn four to keep rolling on lap 32, but he came to a stop to set up the dash to the finish.

Notes: Schlenk’s Rayburn Race Car is powered by a Kirchner Race Engines and sponsored by Micro Armor, Time Out Bar & Grill and Main & Company. ... Schlenk has Ohio victories this season at the upcoming series tracks of Attica Raceway Park (Friday) and Oakshade Raceway (Saturday), including a $4,600 victory on June 26 at Oakshade, where he’s the reigning Late Model champion. ... Just like UMP weekly points leader Schlenk won the Late Model feature, UMP modified points leader Kevin Gilpin captured that division’s feature at Kokomo. ... Sixth-finishing Jack Sullivan broke part of his car’s spoiler midway through the race. During cautions, his car trailed smoke as the team tries to limp through the rest of the series on an ailing powerplant. “We’re just living lap to lap,” said crew member John Sutherland. ... Runner-up Dennis Erb Jr. fell to fifth briefly behind Sullivan after the lap-13 restart, but was back up to fourth by halfway through the race. He restarted fourth after the lap-32 caution before his final charge. ... Third-place Shannon Babb won the only other series event at Kokomo in 2005. ... Provisional starter Jim Moon was the first driver out. ... Doug Drown also pulled to the pits at the lap-13 caution. ... Jeep Van Wormer pulled to the infield on lap 23 and spun to a dusty stop. ... Craig Vosbergen and Donny Walden pulled off during the final caution. ... The series has 26 races down and gets only its second day off Thursday before wrapping up the tour Friday and Saturday at Attica and Oakshade. ... Feger, who ran second for 34 laps, is still in firm command of the chase for the $25,000 championship. He can lock it up by heading to Oakshade with at least a 46-point lead.

Polesitter Joe Janowski outdueled Brandon Thirlby early in the 12-lapper and pulled away for the victory. Fourth-starting Frank Heckenast Jr. moved up to finish second while Brandon Sheppard took the third and final transfer spot from Thirlby with a high-side run on the last lap. Thirlby may get the track provisional because Kokomo doesn't run a weekly Late Model division. The modified consolation race follows the Late Models and the track plans an intermission before the Late Model main event.

In a redraw among heat winners, Jason Feger is on the pole for the main event with Rusty Schlenk alongside. Steve Casebolt starts third. ... In the first modified heat, Tom Bell's car got into the wall between turns one and two and his flipping wreck took down part of the catch fence. Bell wasn't injured. The red flag was out about 15 minutes to make repairs to the fence. ... Modifieds are the only other division on the program. ... National Dirt Late Model Hall of Famer Gary Webb of Blue Grass, Iowa, is in the grandstands just in front of the scoring tower.

Polesitter Rusty Schlenk went around race-long leader Jason McBride on the eighth lap when McBride, struggling on the cushion, dropped to the low side. McBride tried to slide back under Schlenk exiting turn four but got out of shape, and Shannon Babb dropped McBride to third. Schlenk completed the victory with Babb and McBride second and third. Doug Drown was a distant fourth and Craig Vosbergen way back in the fifth and final transfer spot in a race with just six finishers. The first start was called back when Drown got sideways in turn four, collecting Rick Delong and Bill Lewis; Delong and Lewis were both towed to the pits leaving just six cars in the race.

Catching a break when polesitter and overall fast qualifier Jeep Van Wormer broke off his spoiler on the first attempted start, outside front-row starter Steve Casebolt led Van Wormer to victory in the second heat. Casebolt pulled away after a lap-six restart while Tyler Reddick slipped past Van Wormer on the eighth lap to take second. Van Wormer was third and Ken Schrader fourth. Donny Walden, twice part of cautions, overtook Brandon Thirlby heading for the checkers for the fifth and final transfer spot. Thirlby lost a transfer spot on the last lap for the second straight night. It took three green flags to get the race rolling. After the first attempted start, Brandon Sheppard lost a left-front wheel before the race and was towed to the pits (he tried to return to the race but was black-flagged; drivers aren't allowed to pit during heat races). On the second start, Chad Stapleton and Walden tangled in turn two with both cars receiving some damage (Stapleton got sideways on the seventh lap and collected Walden again on the seventh lap).

Polesitter Jason Feger slid to the high side on the first lap and pulled away for an easy victory. Feger built a half-straightaway lead by the midpoint of the 10-lapper and cruised the rest of the way. Outside front-row starter Jack Sullivan was second, just ahead of Dennis Erb Jr., Feger's closest pursuer in series points. Another straightaway back was Ryan Unzicker with Kentuckian Michael Chilton getting the final transfer spot. The first start was called back when Jim Moon and Frank Heckenast Jr. tangled in turn two; Moon was towed off the track.

Jeep Van Wormer of Pinconning, Mich., topped 26 qualifiers Wednesday at Kokomo Speedway for the 26th race of the month-long UMP DIRTcar Summernationals. Van Wormer’s lap of 14.055 seconds at the quarter-mile oval puts him on the pole for the second of three heat races.

The top five finishers from each of five heats transfer to the main event. A consolation race will transfer three more drivers to the feature. Three provisional starters round out the 21-car field. The night’s 40-lap feature at the pays $5,000 to the winner at the track that’s a stronghold for non-winged sprint cars.

Jason Feger will try to stretch his 75-point margin over three-time and defending champion Dennis Erb Jr. of Carpentersville, Ill., as the series heads for the final weekend. Feger has 1,663 points followed by Erb (1,588), Shannon Babb (1,575) and Jeep Van Wormer (1,559). ... Shannon Babb won a 2005 Summernationals event at Kokomo, the only time the track has been part of the series. ... Bob Sargent of Track Enterprises is promoting the event; Sargent also promoted series events in Paducah, Ky., and Macon, Ill. ... Billy Moyer Jr. of Batesville, Ark., is a no-show for the first time on the series, dropping the number of drivers who have attended every event to nine. ... Donny Walden has missed a single race and Jim Moon has missed four events. ... Back on the series for the first time since the Brownstown, Ind., opener is Michael Chilton of Harrodsburg, Ky. ... Chad Stapleton nearly got into the turn-one wall on his qualifying lap. ... Brandon Sheppard missed his spot in the qualifying order and didn’t get to time. ... Bryan Collins of Elsberry, Mo., won the last Late Model event at Kokomo in October 2009.