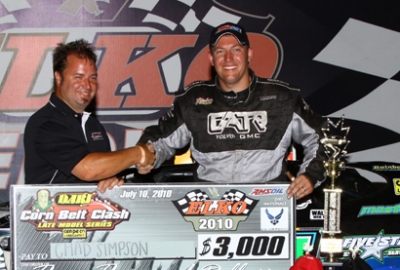 Simpson won Friday’s event with a last-lap pass of Jason Rauen of Farley, Iowa, then overtook Jason Utter of Columbus Junction, Iowa, in the final laps of Saturday’s feature to complete his weekend sweep.

In Friday’s 20-lap feature, Rauen took the early lead over Adam Hensel and Alan Mondus in the early going while the seventh-starting Simpson reached the top five by the fifth lap. The race’s three cautions came between laps 10-12 — for Dave Eckrich’s flat and then two tangles — slowed the action before Simpson went back to work, moving up to second behind Rauen in the final laps. Simpson pulled alongside Rauen at the white flag, then made the winning pass out of turn four for the victory. Rauen, Hensel, Kevin Sather and the winner’s brother, Chris Simpson, rounded out the top five.

In Saturday’s 30-lapper, Marshall Fegers of Mound, Minn., led Utter, Sather, Eckrich and Justin Kay early. After Eric Pember’s lap-three spin, Utter got past Fegers on the restart and was leading when Justin Fegers slowed for a lap-12 yellow (Kay also pulled out during the caution period). When the green returned, the ninth-starting Simpson slid past Eckrich and Sather to take third. Hensel stalled on lap 26 to set up a four-lap dash to the finish. Simpson took second from Marshall Fegers, then overtook Utter in lap one on lap 29 for the winning pass. Utter, Fegers, Eckrich and Sather rounded out the top five.

Notes: Simpson’s MasterSbilt Race Car is sponsored by Liebe Trucking and GATR Volvo-GMC. ... Friday’s feature was cut to 20 laps because of time constraints. ... Several dirt divisions are in action during Elko’s mid-summer dirt action, including IRA Outlaw Winged Sprints. ... Next up for the Corn Belt Clash is a $2,000-to-win event on July 14 at Independence (Iowa) Motor Speedway.