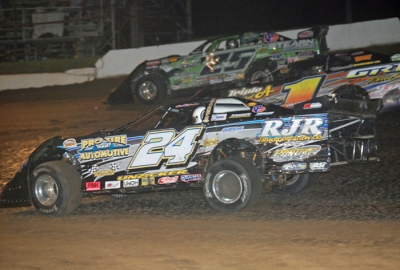 BANNER, Ill. (July 12) — Ryan Unzicker found Spoon River Speedway’s sweet spot faster than anyone else, and it gave him a victory that was oh so sweet.

Blasting to the front as the inside lane picked up speed, Unzicker overtook Jack Sullivan of Greenbrier, Ark., with 13 laps remaining at the 3/8-mile oval and raced to his first career UMP DIRTcar Summernationals victory worth $5,000. | Complete Summernationals coverage

“I knew we were going to get it sooner or later, I just didn’t know when,” said the 28-year-old El Paso, Ill., driver. “We actually struggled all night tonight until the feature. We just kept tuning on it. Actually it wasn’t even very good at the beginning of the feature. I just adjusted on the brakes a little bit, found the right line that worked for the car. Once I found it, it took off.”

The seventh-starting Unzicker burst upon a Jason Feger-Jack Sullivan battle for the lead early in the second half of the race, gaining ground on the hub while Feger worked the high side and Sullivan the middle groove in a lead-swapping battle.

Unzicker took second from Feger on the 26th lap, hit the start-finish line at a near dead heat with Sullivan on lap 27, then roared away on lap 29 when Sullivan slipped over the banking exiting turn two after the frontrunners made contact.

Unzicker had a full-straightaway lead by the 33rd lap and cruised the rest of the way while Tim Lance of Brimfield, Ill., who ran second early, raced back to the runner-up spot. Feger, the series points leader from Bloomington, Ill., was third, followed by polesitter Jeep Van Wormer of Pinconning, who slipped back to eighth early in the feature before rallying. Shannon Babb of Moweaqua, Ill., was fifth and Sullivan ended up sixth.

Feger started outside the front row and built a half-straightaway lead in the first five laps with Lance and Babb in pursuit. Babb and Sullivan dropped Lance to third by the eighth lap and Sullivan was up to the second spot four laps later.

Sullivan began to reel in Feger before the race’s lone caution appeared for Billy Moyer Jr. on the 18th lap, just after a fifth-running Unzicker got briefly sideways on the frontstretch while battling Babb and the lapped car of Brad Denney.

Feger led the field back to green and Sullivan quickly moved up to challenge, running the middle of the track and edging ahead to lead the 23rd lap. Sullivan slid in front of Feger in turn two on consecutive laps with Feger diving back underneath Sullivan in turn three. When Sullivan had to check up as Feger awkwardly slid back in front the second time in turn four, Unzicker was suddenly right in the mix.

Feger’s high line was giving up, leaving the mid-running Sullivan and low-running Unzicker to battle it out up front. After a few side-by-side laps, Unzicker edged ahead on lap 28 but the frontrunners made contact in turn one and Sullivan briefly lost control, sliding over the banking exiting turn two. Unzicker zipped away while Sullivan fell back to sixth before getting back in the racing groove.

“I don’t think he meant to, but I ain’t happy about it. It is what it is,” Sullivan said. “It knocked the steering wheel out of my hands, and by the time I gathered it up, I was sixth.”

“I definitely got into Jack just a hair, but he had a little bit tighter race car than I did,” Unzicker said. "I knew when Jason and Jack were battling side by side, I had a better car than they did. I tried to be as patient as I could. I saw Jack push a little bit, got up underneath of him. I probably should’ve given him another lap or two, but I saw that opportunity, and I ended up taking it.”

Unzicker stretched his lead to a full straightaway by the 33rd lap and cruised the final seven laps.

Fourth-starting Dennis Erb Jr. raced to victory in the 12-lapper over fifth-starting Bobby Pierce, guaranteeing them starting spots in the main event. Brian Diveley and Boone McLaughlin were third and fourth and apparently will be added to the main event as provisionals. Other provisionals are Frank Heckenast Jr. ('09 UMP points), Jason McBride (series) along with Dustin Griffin and Brad Denney (track).

The top two finishers transfer to the main event (the track has also decided to start 24 cars in the main event, so apparently, after series, UMP and track provisionals are determined, the two other highest finishing drivers in the B-Main will also join the starting field):

Polesitter Jason McBride fought off a late challenge for a 12-lap victory. Moon also transfers to the B-Main along with Jimmy Dehm and Adam Mefford.

In a redraw among heat winners, Jeep Van Wormer is on the pole for the main event with Jason Feger alongside. Tim Lance is inside the second row and Doug Drown outside the second row. ... Drivers draw from tabs 1-100, and Lance drew 99 while Drown drew 100. ... It's still breezy and temperatures have dropped about 10 degrees or so since the heats started. There've been a few random raindrops but never enough precipitation to threaten the racing. Radar shows only the slightest of blips in the area, but there are dark skies and clouds.

Polesitter Tim Lance jumped into the early lead and cruised to victory in the final 10-lap heat. He won by a straightaway over his part-time teammate Brian Shirley, who nipped Joe Harlan at the line for the second spot. Billy Moyer Jr. was fourth as front-row starter Dennis Erb Jr. struggled in running the high groove throughout the race, dropping to fifth and into the B-Main.

Polesitter Doug Drown slid in front of fellow front-row starter Steve Lance Jr. in turn two on the first lap and drew away for his third heat race victory on the tour in as many nights. Lance fought off fourth-starting Ryan Unzicker for the second spot, but the low-running Unzicker took the position on the eighth lap. Donny Walden finished just behind Unzicker and Lance for the fourth and final transfer spot. Craig Vosbergen, Drown’s traveling mate from Australia, was a distant fifth.

Polesitter Jason Feger fought off a furious high-side charge by fellow front-row starter Shannon Babb for a victory. Babb couldn’t beat Feger to the critical spot on the straightaways to take the spot, and his last-ditch effort down low at the checkers fell just short. Fourth-starting Kevin Weaver reeled in the frontrunners midway through the race and was right behind Babb in the high groove, but he slipped over the backstretch banking on the last lap to lose ground. Weaver held on to third while Brandon Sheppard got the final transfer spot. Jimmy Dehm stopped on the frontstretch of the fourth lap to draw the lone caution in the 10-lapper.

Polesitter Jeep Van Wormer won a side-by-side, mid-race duel with fellow front-row starter to win the first 10-lapper. Sullivan dropped back a bit the last few laps but finished second while fifth-starting Dillan White was further back in third. A straightaway behind White, ninth-starting Charley Hess got the fourth and final transfer spot. Third-starting Boone McLaughlin was fifth. Fourth-starting Scott Schmitt ran in a transfer spot when he got out of shape in turn one on the third lap, fading back in the pack. Jay Sparks went over the backstretch banking on the first attempted start to draw a yellow. Sparks nearly spun again on the last lap trying to work under Jason McBride. A cool breeze began blowing in the final laps and a few rain drops fell early in the second heat.

Series points leader Jason Feger of Bloomington, Ill., was fastest among 38 qualifiers Monday at Spoon River Speedway for the 24th event on the UMP DIRTcar Summernationals. Feger’s lap of 14.381 seconds at the 3/8-mile oval south of Peoria puts him on the pole position for the second heat.

The top four finishers from each of four heat races transfer to the main event. The top finishers from the C-Main transfer to the B-Main, which transfers two drivers to the feature. Three provisional starters make up the 21-car field. The makeup of a race postponed by rain Wednesday is scheduled to pay $5,000 to the winner of the 40-lap feature.

Jason Feger holds a 32-point lead on three-time and defending champion Dennis Erb Jr. of Carpentersville, Ill., with five events remaining in the pursuit of the $25,000 championship. Shannon Babb of Moweaqua, Ill., is 50 points behind Feger in third while Jeep Van Wormer of Pinconning, Mich., Sunday's winner at Quincy (Ill.) Raceway, is 59 points back. ... Among series newcomers is Boone McLaughlin of Mediapolis, Iowa. ... Dustin Griffin, who made last night's feature at Quincy in his own No. 20, is piloting Jerry Lierly's Crate Late Model tonight; he's guaranteed a track provisional. ... Brian Shirley is back in Tim Lance's backup car (Shirley led six laps at Quincy before breaking an engine), and Kevin Weaver is driving the Randy Korte Racing No. 00 he drove Friday at Tri-City Speedway. ... Spoon River's UMP-sanctioned Crate Late Model division is also in action. ... Spoon River was originally scheduled for July 7, but heavy rains last Wednesday forced the postponement. ... The Summernationals feature is first among feature races on the schedule.