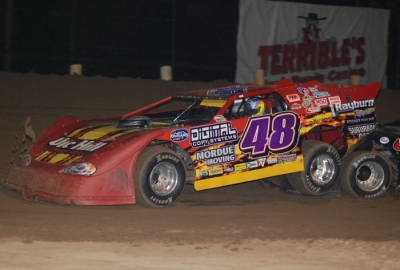 QUINCY, Ill. (July 11) — Jeep Van Wormer was running late all night long at Quincy Raceway — but he was right in time in the 40-lap feature.

The 35-year-old Pinconning, Mich., driver inherited the lead when polesitter Brian Shirley lost power on the seventh lap, then cruised the rest of the way for his fourth UMP DIRTcar Summernationals victory of the season. Van Wormer, who arrived at the track just as time trials began because his race-car trailer had a flat tire two hours away, earned $5,000 for what turned out to be just a few hours work. | Complete Summernationals coverage

“Our team got down a little bit with some adversity today. We had a flat tire, we were really, really late. I was fortunate to get here just in time to qualify,” Van Wormer said. "My guys actually had the car maintenanced last night, so we were ahead of the program. To go out there and set second quick time in our group, win the heat race and start third, you can’t ask for anything better than that.”

Besides being late, the third-starting Van Wormer’s biggest scare of the night came when Shirley failed to accelerate exiting turn two when his engine gave up on the seventh lap. Van Wormer briefly lifted Shirley’s rear wheels off the ground in a nose-to-tail collision, but he steered to the right and down the backstretch as Shirley’s car dropped to the infield.

Series points leader Jason Feger of Bloomington, Ill., who started eighth after setting fast time, took second from outside front-row starter Ryan Unzicker of El Paso, Ill., on the 19th lap, but he never challenged Van Wormer in posting his sixth runner-up finish of the tour. Unzicker finished third while Doug Drown of Wooster, Ohio, was fourth in his debut at the 3/8-mile oval in western Illinois. Multitime track champion Mark Burgtorf of Quincy started and finished fifth.

Babb started 12th and ran as high as fourth, but while trying to take third from Unzicker on the 26th lap, he got tangled up with the lapped car of Brandon Thirlby on the frontstretch and the connected cars spun inside turn one. Babb rallied from the rear of the lead lap to finish sixth.

Erb started ninth and battled mid-race with Burgtorf and Babb but settled for seventh, helping Feger extend the 10-point lead he brought into the tour's 23rd event.

Notes: Van Wormer’s Rocket Chassis is sponsored by Bayline Fire Protection, spindlejoes.com, and Globe Technologies. ... Van Wormer is tied for seventh in all-time Summernationals victories with Dennis Erb Jr. at 15. ... His previous Summernationals victories this season came at Vermilion County Speedway in Danville, Ill.; I-96 Speedway in Lake Odessa, Mich.; and Fayette County Speedway in Brownstown, Ill. ... Doug Drown posted a career-best fourth-place Summernationals finish. ... Mark Burgtorf’s fifth-place finish was his best in eight series appearances in 2010. ... Twelve of 21 starters were running at the finish. ... Billy Moyer Jr. was the first driver out after throwing a rod through the oilpan in his car’s powerplant. ... Donny Walden’s No. 1w broke a left-rear axle. ... Brandon Thirlby pulled in with an overheating car after his scrape with Babb. ... Justin Reed won the night's IMCA Late Model feature.

Drivers running the high side carried so much momentum in the heat races that it was difficult to pass. Infield tires were pushed out, tightening the track. But during a brief intermission, track workers used the grader and pack trucks to smooth the track, and they also pushed the tire barriers about 15 feet back toward the infield, widening the oval. ... Dustin Griffin of nearby Camp Point, Ill., was the lone driver of an IMCA spec-engine car to transfer to the main event through preliminaries. The 23-year-old, who also finished third in overall UMP Crate points last season, made a mistake with his three-wheel braking in the heat, but still managed a fourth-place finish. He’s eyeing a step up to open-competition UMP competition in 2011 (adding that his father would help make that decision). Griffin has a Kuntz & Co. powerplant he bought from fellow Quincy driver Denny Woodworth that would be capable. “Hopefully next year we’ll get a big motor and wean ourselves off the crate,” Griffin said. ... Jeep Van Wormer’s team discovered a flat tire on the team’s hauler after eating at Wendy’s in Lincoln, Ill. They drove at a 50 mph clip to Springfield to get the tire changed and arrived just as time trials were starting. That wasn’t the end of Van Wormer’s dealing with tires — he had to prepared tires for Quincy’s main event because the rubbered surface the previous night at Fairbury wore out last night’s rubber. “It kill’s em,” said Van Wormer, adding that he usually can run tires for two or three features. ... Jason McBride broke a lift or a rocker arm during time trials in the first car he unloaded at Quincy, so he brought out a backup car for the heat race. He’ll get a series provisional starting spot for the main event. ... Denny Woodworth is competing in the IMCA division in a spec engine car and in the UMP division with a car equipped with an open-competition powerplant. ... Doug Drown won a heat race for the second consecutive night at a track he’s never seen. At Fairbury, he was running fifth when a hole in his left-rear tire knocked him out of the feature, and he’ll start in the second row of the Quincy feature after winning a heat. “Macon was a little small,” Drown said of the fifth-mile oval, but otherwise he’s found Illinois tracks similar to Attica Raceway Park in his home state of Ohio. “You gotta get it on the right front and steer it around."

Polesitter Brandon Thirlby held off Steve Lance Jr. amid lapped traffic late in the race for a B-Main victory and a transfer spot to the main event. Lance finished second for the other transfer spot while RIckey Frankel was just behind in third. Craig Vosbergen got out of shape twice but managed to finish fourth. Front-row starter Dustin Neese faded to finish seventh.

In the redraw of heat winners to set the front for the main event, Brian Shirley is on the pole with Rhan Unzicker alongside. Jeep Van Wormer and Doug Drown are in row two.

The top two finishers transfer to the main event. Jason McBride is among scratches because he's in a line for a series provisional:

In a heat with three of the top four drivers in series points, outside front-row starter Jeep Van Wormer used his high-side momentum to grab the lead over polesitter and series points leader Jason Feger. Van Wormer led all the way, stretch his lead to a half-straightaway on Feger, who was a half-straightaway ahead of Babb. Further back in the fourth and final transfer spot was Billy Moyer Jr. with hometown driver Rickey Frankel in fifth. Jason McBride started on the tail after arriving late to the lineup and pulled into the infield in the final laps.

Polesitter Brian Shirley, who rolled his No. 3s over the turn-two banking last year at Quincy, nearly slipped over the banking again on the third lap in the 10-lapper but held on for the victory. Shirley got the jump on fellow front-row starter Denny Woodwort and fought off challenges from Woodworth, especially on Shirley's lap-three slipup. Jack Sullivan ran third the whole way and sixth-starting Brandon Sheppard got the fourth and final transfer sport. Australian invader Craig Vosbergen got badly out of shape in turn three midway through the race but recovered to finish sixth.

Polesitter Doug Drown, making his Quincy debut, jumped into the lead at the outset and cruised in the heat race with the most IMCA-legal cars. Drown and runner-up Bobby Pierce pulled away from the field with Tim Lance finishing a distant third. IMCA racer Dustin Griffin got the fourth spot, outrunning Dustin Neese.

Outside front-row starter Ryan Unzicker outdueled polesitter Mark Burgtorf on the first lap and raced to a 10-lap victory. Burgtorf kept the heat on Unzicker most of the way in settling for second while Dennis Erb Jr. started and finished third. Donny Walden got the fourth and final transfer spot over Brandon Thirlby. A lapped Russ Schoonover went over the turn-one banking to draw a lap-six caution.

Series points leader Jason Feger of Bloomington, Ill., topped 32 qualifiers Sunday in time trials for the 23rd event on the month-long UMP DIRTcar Summernationals. Feger’s time of 13.036 seconds at the 3/8-mile oval puts him on the pole of the fourth heat race.

Other heat race polesitters based on group qualifying: Mark Burgtorf of Quincy; Doug Drown of Wooster, Ohio; and Brian Shirley of Chatham, Ill.

Jason Feger of Bloomington, Ill., enters the event as the new series points leader by virtue of his fourth-place finish at Saturday at Fairbury (Ill.) American Legion Speedway. Previous points leader Dennis Erb Jr. of Carpentersville, Ill., suffered a flat tire at Fairbury and finished 14th. He's 10 points behind Feger while Fairbury winner Shannon Babb is just 30 points out of the lead in one of the tightest three-way battles for the $25,000 championship in history. .... With just 18 drivers on hand who have competed in previous Summernationals events, several of Quincy’s regulars in its IMCA-sanctioned Late Model division are also running in the UMP division. Those drivers — with cars that run spec engines with a few hundred horsepower less than open-competition engines for most UMP regulars — are allowed to run their regular IMCA tires in preliminary events, but if they make the feature, they’re required to use either UMP-legal tires or the hardest IMCA tires on the rear in the main event. ... The track is also running a regular program for its IMCA Late Models with 17 cars entered. ... Denny Woodworth of Mendon, Ill., leads the track’s IMCA points, but he’s also a regular in open-engine competition with Lucas Oil MLRA. ... Hometown driver Mark Burgtorf, who fields separate IMCA and UMP cars for Nelson Motorsports, has won more than 10 IMCA Late Model titles at Quincy. He’s run several Summernationals events and stands 24th in points. ... Dustin Griffin of Camp Point, Ill., competes in IMCA action and UMP crate action regionally; he won the UMP Crate title last season at Spoon River Speedway in Banner, Ill., where the Summernationals visit on Monday. ... Michigan driver Jeep Van Wormer’s hauler had a breakdown near Springfield, Ill., he arrived just as time trials began. Despite missing hot laps, he posted the third fastest time overall. ... Rodney Melvin of Benton, Ill., who has missed just one previous series event, is a no-show at Quincy. He led 34 laps last year before ignition woes struck, handing the victory to Shannon Babb. ... Brian Shirley is back in Tim Lance’s backup car (No. 48x) instead of his own No. 3s.