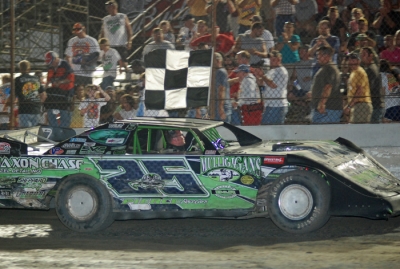 The 32-year-old Bloomington, Ill., driver led all 40 laps at Tri-City Speedway for a dominating performance, lapping all but four competitors in a race on the high-speed 3/8-mile oval where more than half the field dropped out by the 11th lap. | Complete Summernationals coverage

The polesitting Feger, who finished second in the last two series events, pocketed a career-high $10,000 in winning at Tri-City for the second year in a row on the series. He also cut series points leader Dennis Erb Jr.’s lead to 13 points from a 28-point margin Erb held heading into the 21st series event.

"The car was fast from the time we unloaded," Feger said. "It just feels good to finally (after) five seconds to finally get a win because the car's been so fast. To do it with my first $10,000-to-win event makes it even a lot better."

Sixth-starting Will Vaught of Crane, Mo., ran second virtually the whole race, but he was more than a third-track margin behind Feger when the checkered flag fell on the nine cars running at the finish. Shannon Babb of Moweaqua, Ill., started 12th and advanced to third ahead of Erb, the Carpentersville, Ill., driver who is gunning for his fourth straight $25,000 Summernationals title.

Brian Shirley of Chatham, Ill., started 10th and ran as high as third before finishing fifth, the last driver on the lead lap.

Four cautions slowed the action, all in the first 11 laps as the field was whittled down to 10 cars early in the event. Chad Zobrist spun in turn four on the second lap, collecting Brandon Sheppard and knocking both cars out of the race.

Third-running Mark Burgtorf slowed his smoking car on the eighth lap for the third caution after a bolt broke on his car’s panhard bar. And the final caution waved when Mark Voigt’s driveshaft went spinning off the car on lap 11, the same lap that Jeep Van Wormer pulled his No. 55 pitside with a broken engine.

All the while, Feger ran unchallenged out front, and on the 29-lap green-flag stretch that completed the race, Voigt fell further and further behind as Feger began picking off lapped cars the rest of the race.

Matt Miller of Waterville, Ohio, was a half-track behind Feger in third when he pulled to the infield on lap 35 with a broken fuel pump belt and it was all but over as Feger carefully lapped the occasional car.

Unofficially after 21 series events, Erb leads the series with 1,371 points and Feger has 1,358 as the top two separate themselves from the pack.

Track officials plan to work the track during a 15-minute intermission before the main event. ... Feature starters will go into the grandstands before the main event to collect for Special Olympics. A Special Olympics sponsorship provides tow money to Summernationals regulars. ... Provisional starters are Jack Sullivan (series points), Brandon Sheppard (based on UMP ’09 points) and Billy Laycock (track points). ... Sheppard switched to a backup car after breaking a drive flange in his original car. ... Rodney Melvin is making his fourth series start in his No. 27 MasterSbilt at Tri-City. He’s entered his Rayburn Race Car in every other series event. “We’ve about run that one into the ground,” said his father Bob Melvin. ... Kevin Weaver is driving the Rocket Chassis that Randy Korte drove in many of last year’s Summernationals events. He has some history with the car. “I know that car punted me last year at Macon,” Weaver said with a smile. ... Tri-City is hosting back-to-back $10,000-to-win events as the Lucas Oil Late Model Dirt Series visits the track next Friday.

Craig Smith built a straightaway lead halfway through the 12-lapper and cruised the rest of the way. Chad Zobrist, . The first of two cautions appeared on the ninth lap when Craig Vosbergen spun between turns one and two; Vosbergen pulled off the track and Brandon Thirlby also parked with a flat right-rear tire. Chris Fetter spun in turn one on the 10th lap, causing a scramble that knocked him out of the race.

In the redraw among heat winners, Jason Feger drew the pole position with Ryan Unzicker alongside. Jeep Van Wormer and Mark Burgtorf make up the second row. The C-Main comes up shortly followed by lower-division heat races, the B-Main, track prep and then the Late Model feature.

Polesitter Jeep Van Wormer cruised to an easy victory, winning by nearly a straightaway over sixth-starting Mark Voigt. Voigt held off a late challenge from Shannon Babb, who fell back to sixth early but rallied in the high side to finish third. Kevin Weaver got the fourth and final transfer spot as Chad Zobrist faded in the final laps. A lap-two caution for debris on the frontstretch, just Zobrist's car turned abruptly right entering turn three (Zobrist got his spot back for the restart). Zobrist had gotten badly out of shape in turn two on the first lap, briefly collecting Jason McBride before everyone continued. McBride dropped out midway through the race after peeling a left-rear tire off the rim.

Polesitter Jason Feger led all the way, building up a half-straightaway lead on fourth-starting Terry English, who took the second spot from outside front-row starter Billy Moyer Jr. early in the race when Moyer slipped high in turn four. Moyer got the third spot and Rodney Melvin got the fourth and final transfer spot over eighth-starting Dustin Korte. Two yellows slowed the action. Lee Thomason spun between turns one and two to draw a lap-two caution and Brandon Sheppard slowed on the fourth lap while trying to take the third spot from Moyer.

Will Vaught led the first seven laps from outside the front row, but he got completely sideways between turns three and four, allowing polesitter Mark Burgtorf to roll by. Voigt gathered up his car but finished second to Burgtorf while Brian Shirley ran third. Dennis Erb Jr. slipped under Craig Smith in turn two on the eighth lap when Smith got out of shape briefly, giving Erb the final transfer spot. Jack Sullivan lost the fifth spot to Erb when he got into the turn-four wall just before the race's midpoint, but he continued. Scott James pulled out on the final lap.

Outside front-row starter Ryan Unzicker got the jump on polesitter Doug Drown and raced to a 10-lap victory. Unzicker edged away to build a half-straightaway while Drown had his hands full with fourth-starting Matt Miller most of the way. Unzicker's lead was erased by a lap-nine caution for Chuck Mitchell's turn-four spin, and he held on for the one-lap dash to the finish. Drown and Miller were second and third while Nick Lyons lost the fourth spot on the final restart when Bryan Collins tried to power under him in turn two, making contact and leaving Lyons sitting atop turn two. Collins continued with his damaged car to get the spot.

Jason Feger of Bloomington, Ill., last year’s series winner at Tri-City Speedway, topped 39 qualifiers Friday for the 21st leg of the month-long UMP DIRTcar Summernationals. Feger’s lap of 14.663 seconds on the 3/8-mile oval gives him the pole position for the third heat race.

Series points leader Dennis Erb Jr. of Carpentersville, Ill., fresh off Thursday’s victory at Macon (Ill.) Speedway, leads the tour to the 3/8-mile oval. Erb has 1,301 points to lead the series over Jason Feger of Bloomington, Ill. (1,273 points), Jeep Van Wormer of Pinconning, Mich. (1,247) and Shannon Babb of Moweaqua, Ill. (1,238). ... Tri-City regular Randy Korte, out of action after back surgery this summer, has his RKR Motorsports team on hand at the track with his son Dustin and former series champion Kevin Weaver piloting team entries (Billy Faust drove one of the No. 00k cars at an earlier series event in Highland, Ill.). ... Chad Zobrist, who has entered three series events in his own No. 78, is driving the Gerstner Plumbing No. 6k at Tri-City. Other drivers who have piloted Gerstner cars on the series: Michael Kloos and Rodney Melvin. ... Returning to the series is Scott James, who posted fourth- and sixth-place finishes last weekend on the series at Paducah and I-55; a late arrival, James got a few practice laps on his own after all the other divisions hot-lapped. ... Also returning is Matt Miller of Waterville, Ohio, who had three fifth-place finishes over the first five series event. ... Another returneed is Will Vaught, runner-up last Saturday at I-55 Raceway. ... Among series first-timers: Billy Laycock, Claude Walker Jr., and Rickey Frankel. ... Modifieds, sportsman and street stock divisions are also in action; the Late Model feature is first on the schedule. ... There’s lots of standing water around the property, including a few spots in the infield after lengthy overnight rains around St. Louis. During qualifying, the track was smooth in the inside groove but was progressively choppier up the banking. ... Time trials were twice delayed because cars didn’t have transponders. Dennis Erb Jr. switched cars but didn’t move his transponder, while the transponder on Lee Thomason’s apparently malfunctioned, possibly because it was to close to the engine’s header. ... Rickey Frankel got another qualifying because his first lap was obstructed by another car; his second lap was quicker but left him in the same spot in the second group.