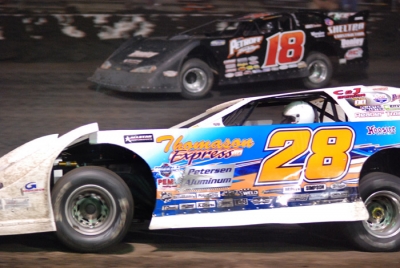 MACON, Ill. (July 8) — The three major players in Thursday’s 30th annual Herald & Review 100 at Macon Speedway agreed on one thing: you never know what’s in store at the tight fifth-mile oval where drivers bang into cushions, and often into each other, seemingly every lap.

"We had a good car,” said UMP DIRTcar Summernationals points leader Dennis Erb Jr., "but 100 laps around this place, anything can happen.” | Complete Summernationals coverage

And last year’s winner Shannon Babb of Moweaqua, Ill., knew the $6,000-to-win race was up for grabs. "It was just one of them deals,” he said, “where you never can tell what it’s going to turn into until the checkered falls.”

It turned out the checkered flags fell on Erb after Feger fell from the lead after a lap-80 tangle with Babb, and then Babb handed the lead to Erb with a cushion-jumping mistake on lap 97.

Running the low groove and staying out of trouble, Erb picked his way to the front from his 12th starting spot and led the final four laps to capture the 20th leg of the Summernationals and extend his points lead on some of his closest pursuers. The 37-year-old Erb was typically low-key in the victory lane, but he carried the checkered flag around the track with gusto in a reverse victory lap to celebrate his second series victory of the season and 15th of his career.

“We just had to stay clean and keep out of trouble, be patient and work our way up through there,” said Erb, who broke into the top five by the 40th lap. “We just put ourselves in a good position there at the end where we could capitalize on it.”

Feger, who led laps 62-80, settled for a his fifth second-place finish on the Summernationals with the fourth-starting Babb just behind in third after leading twice for 23 laps. Seventh-starting Jack Sullivan of Greenbrier, Ark., was fourth and 14th-starting Ryan Unzicker rounded out the top five in a race where 14 battle-scarred cars were running at the finish.

Polesitter Brian Shirley of Chatham, Ill., led the first 54 laps in Tim Lance’s backup car, but he lost oil pressure five laps after giving up the lead to Babb. Brandon Sheppard of New Berlin, Ill., pressured Shirley for the lead early in the race, but he slammed an infield tire barrier in turn four on the 33rd lap and spun his tattered car twice more on laps 80 and 94.

Upon Shirley’s departure, it appeared to be a two-car race between Babb and Feger, who got rolling on the high-side after a lap-59 restart and swept into the lead on lap 62. He edged away from Babb, outside front-row starter Kyle Logue and Erb until Sheppard’s turn-two spin on lap 80 bunched the field.

On the restart, Babb pulled alongside Feger exiting turn four and drifted toward the frontstretch wall, squeezing Feger and drawing contact that knocked Feger back to third. Babb said he thought he was clear, but Feger wasn’t buying it.

"A little place like this, you’ve gotta have some respect,” Feger said, “and I don’t know exactly what he was doing.”

Erb moved into second and worked the low groove the rest of the way while Babb ran up top.

“When I saw them guys get together there, I kind of backed off a little bit because I didn’t know what was going to happen,” Erb said. "We just kept plugging away, running our line down there, and it just paid off for us.”

Cautions on laps 91 (for Sheppard’s spin between turns three and four) and lap 94 (for a stalled Tim Lance exiting turn two) kept things tight up front, but Feger couldn’t keep up with the Babb-Erb duel.

Babb was heading to wrapping up his second straight Summernationals victory at Macon when he got too high exiting turn two. His black No. 18 got bogged down in the soft dirt and Erb zipped past. Babb’s take? He choked.

“That cushion’s been there all night long and we ran ninetysomething laps and I never did that,” he said. “So that one time I just let my guard down and let it shove too straight.”

Erb was all too happy to take advantage and he led the last four laps with Feger vainly trying to ride the high groove back to the front.

“I saw (Babb) go up there and hit that. I didn’t know what happened for sure,” Erb said. "I just kept running my line down there because he could’ve come right back around there. You never know. We just kept plugging away down there and we were able to get the win.”

Notes: Erb’s Rayburn Race Car is powered by a Vic Hill Racing Engine and sponsored by Thomason Express, McBride Mack and C.J. Excavating. “Without them it’s impossible, so I just want to say thanks to them,” Erb said of his sponsors. ... Erb leads with 1,301 points over Feger (1,273) and Jeep Van Wormer (1,247). ... Erb’s previous Summernationals visit came at the other tiny series track, Belle-Clair Speedway in Belleville, Ill. ... None of the six cautions were for serious incidents; Steve Sheppard Jr. and Rodney Melvin tangled in turn four on lap 50, and Melvin headed pitside after officials told him he’d restart on the tail. ... Jim Moon had a flat left-rear tire on lap 59. ... Tim Lance ran as high as second on lap 14 but dropped out of the top five after a lap-33 restart. ... Macon regular Rodney Standerfer took a provisional and started 21st, rallying to finish seventh. ... Next on the Summernationals schedule is a $10,000-to-win race Friday at Tri-City Speedway in Granite City, Ill.

In a consolation with a wild final lap — both times it was run — Roger Brickler came out on top of the 12-lapper. Polesitter Dick Taylor led all the way, but he tangled with the slower car of Dennis Vandermeersch between turns one and two after taking the white flag, and his No. 24 was towed off the track. Brickler inherited the lead for the restart, and he cruised to victory while a wild battle ensued behind him on the one-lap dash to the checkers. Jeff Beyers restarted second, but his car got hung up in between turns three and four and he slid high to the wall. Jim Moon took second and Mike Hammerle ducked underneath to get the final two transfer spots. From there back it was a scramble just to make it to the finish line. Billy Moyer Jr. scratched but gets a series provisional. Donny Walden, by virtue of Mike Hammerle making the race, gets a provisional based on '09 UMP points.

Billy Moyer Jr. is planning to skip to the race and take a series provisional; Ken Schrader has already loaded up:

Brian Shirley will start on the pole for the 100-lapper after the redraw among heat winners. Kyle Logue starts outside the front row while Brandon Sheppard and Shannon Babb are in row two. Tim Lance, Shirley's teammate, starts fifth.

Polesitter Tim Lance led all the way, holding off a last-ditch challenge from four-time Herald & Review 100 winner Kevin Weaver in the 10-lapper. Weaver had to jump on the binders down the backstretch on the first lap when Lance went wide, but recovered and nearly slipped under Lance exiting turn four on the final lap. The battle for the third and final transfer spot was a good one between second-row starters Richie Hedrick and Donny Walden. Walden dipped into the infield to grab the spot on the eighth lap, but Hedrick regained his momentum on the high side and swept back into third at the white flag. He held on for the transfer spot while Walden heads to the B-Main.

Outside front-row starter Brandon Sheppard got the jump on polesitter Rodney Melvin and cruised to victory in a caution-free prelim. Melvin finished a half-straightaway back in second while Ryan Unzicker got the third and final transfer spot. Roger Brickler was fourth and heads for the B-Main.

Polesitter Kyle Logue fought off a mid-race challenge from Steve Sheppard Jr. and raced to a 10-lap victory. Sheppard battled the rest of the way with fellow second-row starter Jeep Van Wormer, holding on to the second spot by a car length over Van Wormer. The top three transfer to the main event while fourth-finishing Jim Moon heads to the B-Main. Two cautions slowed the action. The first start was called back when Steve Sheppard Jr. rolled to a stop on the backstretch. The second yellow appeared on lap three when fourth-running Ryan Little, who started outside the front row, got into the frontstretch wall.

Polesitter Shannon Babb, last year's series winner at Macon, led a three-car breakaway in the second heat. Babb, Jack Sullivan and Dennis Erb Jr. ran in a tight pack all the way. Babb led all the way but Erb held the second spot early when Sullivan pushed high in turns one and two on the first lap. Sullivan went to work in the low groove, edging back past Erb at the halfway point. All three transferred to the main event while fourth-finishing Mike Hammerle heads to the B-Main.

Polesitter Brian Shirley got the jump on fellow front-row starter Jason Feger and led all the way in the caution-free 10-lapper. Feger nosed in on Shirley down the frontstretch on the first lap, but Shirley — driving Tim Lance's backup car — led by a few lengths most of the way for the victory. Feger was second and fifth-starting Brian Dively ran unchallenged in third for the final transfer spot. Former Herald & Review 100 winner was further back in fourth.

Brian Shirley of Chatham, Ill., topped 34 qualifiers Thursday at Macon Speedway for the 20th leg of the UMP DIRTcar Summernationals. Shirley, the night’s first qualifier, turned a lap of 11.126 seconds at the fifth-mile oval to earn the pole position for the first heat race.

Three-time and defending series champion Dennis Erb Jr. of Carpentersville, Ill., leads the tour with 1,216 points. Jason Feger of Bloomington, Ill., and Jeep Van Wormer of Pinconning, Mich., are tied for second with 1,193 points and Shannon Babb of Moweaqua, Ill., last year's series winner at Macon, has 1,163 points. Thirty-four cars are entered. ... Wednesday's event at Spoon River Speedway in Banner, Ill., was rained out and rescheduled for Monday, July 12. ... Among series newcomers at Macon are Doug Drown of Wooster, Ohio, along with Australian driver Craig Vosbergen, who is running 18 events over 30 days on his trip stateside, including several Summernationals races. ... Returning to the series is Richie Hedrick of Urbana, Ill., who entered the first season events before breaking a motor at Clayhill Motorsports Park. ... Jeremy Nichols, Macon's Late Model points leader, was a no-show. ... Former track champion Kyle Logue told fellow driver Jason Feger its the wettest he’s seen the track surface this season, and promoter Bob Sargent warned drivers the track might require work with the grader to deal with a potential cushion. “Don’t be crying or surprised if we change the track,” Sargent said at the drivers’ meeting. ... Following Macon, the series heads to Tri-City Speedway in Granite City, Ill., for a $10,000-to-win event.