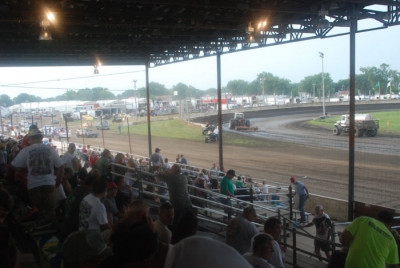 The grandstands are now covered at Lincoln. (DirtonDirt.com)

LINCOLN, Ill. (July 3) — After 18 straight UMP DIRTcar Summernationals races over 18 days, Mother Nature finally got one on the 29-race tour. Rain that hit just as the 40-lap feature began Sunday at Lincoln Speedway forced the postponement of the 19th leg of the tour at the quarter-mile oval in central Illinois. | Complete Summernationals coverage

The makeup date for the $5,000-to-win event is July 25, but it won't be a Summernationals race, series director Sam Driggers said. Events held after the scheduled July 17 finale aren’t included in series points.

The Late Model feature — the third feature of the night after Crate Late Models and modifieds — rolled onto the track just as sprinkles started to fall. Officials got the 21-car field lined up and threw the green flag, but heavier rain started almost immediately. Outside front-row starter Brian Shirley led the first lap, but the caution lights appeared on the second lap as drivers began to get squirrelly on the rain-slickened oval.

Monday marks the first scheduled day off for the series, which returns to action on Tuesday at Fayette County Speedway in Brownstown, Ill., with a $5,000-to-win event.

Third-starting Jeep Van Wormer swept around the outside of early leader Michael Kloos midway through the 12-lapper and cruised the rest of the way. Kloos and polesitter Scott Bull got the other two transfer spots to the main event while Mark Burgtorf missed out in finishing fourth. Outside front-row starter Mark Voigt slowed and pulled his smoking car off the track after taking the white flag.

In the redraw among heat race winners, Dennis Erb Jr. will start on the pole with Brian Shirley alongside. Scott James will start third.

Third-starting Brian Shirley worked under polesitter Jason Feger exiting turn two on the third lap and cruised the rest of the way. Feger went to the rarely used high groove after falling to second, but lost a spot to Brandon Sheppard and tried to get back down, but it was too late to stop sixth-starting Steve Sheppard Jr. Feger ended up fourth. The battle for the fifth and transfer spot was up for grabs most of the race with Brian Harris trying to hold off Mark Burgtorf and tail-starting Jeep Van Wormer. Harris looked to be in control on the backstretch the final lap, but Burgtorf and Van Wormer both dug deep and the trio crossed the line nearly three wide with Van Wormer just a few few behind Harris in sixth. Burgtorf was seventh.

Polesitter Dennis Erb Jr. eased away from the field for an easy victory while fifth-starting Ryan Unzicker slipped under Eric Smith and Jack Sullivan over the first two laps to grab the second spot. Unzicker was the runner-up, fighting off a late charge Sullivan with Smith in pursuit in the low groove. Tanner English was further back in the fifth and final transfer spot in the caution-free prelim. Jay Sparks pulled to the infield on the second lap.

Looking good for the third straight night on the tour, Scott James cruised to victory from his pole position while second-starting Jason McBride finished second holding off Billy Moyer Jr. James had a straightaway lead erased by a late caution but ran unchallenged the final lap. Dillan White was further back in fourth and Shannon Babb got the fifth and final transfer spot as virtually every driver stuck with the low groove. Jim Moon spun in turn four to draw a lap-nine caution.

Series points leader Dennis Erb Jr. of Carpentersville, Ill., was fastest among 33 qualifiers Sunday at Lincoln Speedway for the 19th leg of the 29-race UMP DIRTcar Summernationals. Erb will start on the pole of the second heat race at the quarter-mile oval in central Illinois.

The top five finishers from each of three heat races will transfer to the main event. The top three finishers from the B-Main advance to round out the 21-car feature lineup along with three provisional starters. The night’s 40-lap feature pays $5,000 to the winner.

Ten drivers have entered all 19 races. Rodney Melvin of Benton, Ill., among the drivers entering the first 18 series events, was a no-show at Lincoln. ... Wendell Wallace of Batesville, Ark., who has entered most of the series events, also dropped off after running the last three events. ... Billy Moyer of Batesville, Ark., who won the last three series races in Atwood, Tenn., Paducah, Ky., and Pevely, Mo., has dropped off the tour for the second time; he has six victories in seven series starts. ... With Monday looming as the first day off on the series, the 24-year-old tour is wrapping up its second-ever longest consecutive-day stretch of racing with its 19th straight race. The record was 21 straight nights of racing in 2000. ... A roof has been constructed over the grandstands at Lincoln.