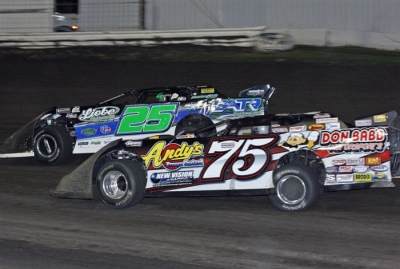 Simpson denied polesitter Terry Phillips of Springfield, Mo., who was gunning for his 100th career MLRA victory on what would have been the 68th birthday of his late father, five-time NASCAR weekly champion Larry Phillips.

Phillips was second while Travis Dickes of Madison, Neb., was third. Jason Utter of Columbus Junction, Iowa, was fourth and Kelly Boen of Henderson, Colo.

Simpson led Phillips by a nose on the first lap as the top two cars broke away for a straightaway lead over Dickes by the fourth lap.

After Alan Vaughn slowed in turn four to draw a lap-seven caution, the race’s only yellow, Simpson powered to a 10-length lead while Kyle Berck dropped out on the 12th lap as the race stayed green.

At the halfway point, Phillips started to cut into Simpson’s lead with Dickes, Utter and Boen in the top five. Simpson led the frontrunners through lapped traffic the rest of the way, holding on for the victory.