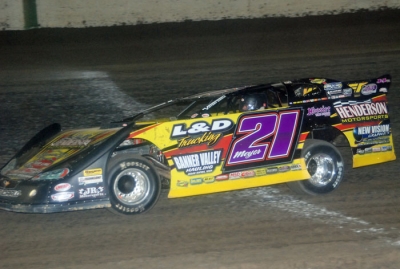 Billy Moyer heads for victory at I-55. (DirtonDirt.com)

PEVELY, Mo. (July 3) — Billy Moyer’s domination of the UMP DIRTcar Summernationals continued Saturday at I-55 Raceway with a $10,000 victory, his sixth checkered flag in seven 2010 series starts. The 52-year-old Hall of Famer from Batesville, Ark., led all 40 laps from the pole position, fending off a few challenges fellow front-row starter Will Vaught of Crane, Mo., for his series-leading 78th career triumph. | Complete Summernationals coverage

Vaught tried to snooker Moyer in traffic in the race’s late stages, but the leader never faltered in wrapping up his third straight series victory. Moyer also won the first three series races. Vaught settled for second with Brian Birkhofer of Muscatine, Iowa, in third. The winner’s son, Billy Moyer Jr., was fourth.

Series points leader Dennis Erb Jr. of Carpentersville, Ill., rallied from his 10th starting spot to finish fifth and stretch his points lead as his closest pursuers, Shannon Babb and Jason Feger, were tangled up in the same turn-two accident on the seventh lap. Feger spun and nearly rolled over after Babb was left with nowhere to go and slid underneath Feger's car.

Promoter Ray Marler has doubled provisional starting spots from three to six, meaning two drivers from series points, two drivers from '09 UMP points and two track representatives have been added to the lineup. Jack Sullivan and Rodney Melvin get series provisionals (Sullivan will drive Billy Moyer Jr.s' backup car) while Ryan Unzicker and Mark Voigt will get provisionals based on last year's UMP weekly points. The track representatives will be Bryan Collins and Dave Jumper for a 24-car field. Only two other of the 16 previous series tracks have added cars to the regular 21-car field (Kankakee County and Wilmot added one apiece). The track made the first lineup call for the feature at 10:40 p.m., but there's a planned collection for Special Olympics before the main event.

Jeep Van Wormer rallied from his 10th starting spot, overtaking outside front-row starter and race-long leader Dewayne Kiefer in the second half of the race to capture the B-Main. Van Wormer and Kiefer get the two transfer spots to the main event. Fourth-finishing Ryan Unzicker should be in line for a series provisional, while fifth-finishing Mark Voigt should be in line for a provisional based on '09 UMP weekly points.

Correction: Fixes Lyons sted Kiefer as runner-up; Kiefer was disqualified for being light at the scales.

Fourth-starting Butch Kruckeberg cruised to a quarter-track victory in the 12-lapper to transfer to the B-Main. Also transferring to the B-Main is Matt Wiedner, Jason Crump and Dan Jacober.

Of the top 15 in series points, only seven drivers transferred to the main event through heat races. ... Fourth-place Jeep Van Wormer plans to run the B-Main to test some setups, but he’s in line for the series provisional. ... GRT house car driver Jack Sullivan, fifth in series points, is done for the night after hurting a motor in time trials, giving the team three straight nights of motor problems, potentially ending their series. But engine builder Vic Hill diagnosed the problems with the motor they hurt at Paducah over the phone, calling GRT’s Joe Garrison at 6:30 a.m. Saturday to describe how he’d likely find a pinhole leak in the intake that was causing the problems in that specific engine configuration. “I looked in there and cleaned it out, and there it was,” said Garrison, who initially thought they’d burned a piston. They sealed the pinhole crack with J-B Weld and that powerplant should be ready to go again for Sunday’s race at Lincoln, Ill. If the team has other engine problems, Dennis Erb Jr. is carrying another Vic Hill powerplant that Sullivan could use, if necessary. ... Jason Feger’s team swapped radiators after finishing third in their heat race. “It was a little warm,” Feger said. “Better to be safe than sorry.” ... Will Vaught won the fourth heat, a lively battle where he was glad to get out front and get some racing room. That room allowed him to “run where the car wanted to, not necessarily where I wanted to,” Vaught said. “It’s the best I’ve been in a heat race here in a long time.” Vaught won a MARS DIRTcar Series event at I-55 last August. ... Dan Jacober had problems in time trials and missed his heat race but plans on running the C-Main. “The fuel pump gave up on it,” said Dave Jacober, the driver’s father. “We hope we got it fixed.” ... Wendell Wallace had a flat tire last night while leading the B-Main at Paducah, bad timing for the Arkansas driver. “About everything I’ve done on this deal has been bad timing,” he joked. Wallace is locked into I-55’s main event after finishing fourth in his heat race. ... The C-Main is rolling onto the track at about 9:25 p.m.

In the redraw among heat winners, Billy Moyer is on the pole in gunning for his third straight series victory. Will Vaught starts outside the front row with Brian Birkhofer and Billy Moyer Jr. in row two.

The top two finishers start in the ninth row of the main event:

Top four transfer to rear of B-Main (Sullivan is expected to scratch):

Fourth-starting Will Vaught slipped under outside front-row starter Rodney Melvin on the sixth lap and led the rest of the 10-lapper for a victory, pulling away from a tight battle that saw multiple lead changes among the four transfer spots. Vaught pulled far away at the finish but it was still a wild battle for second as five different drivers held the spot at different times. Polesitter Scott James, who fell back as far as fourth, rallied to finish second, just nipping fifth-starting Brian Shirley at the line for second. Shannon Babb, who started sixth and was up to second after just two laps, coudn't maintain his high-side pace and ended up fourth. Melvin slipped all the way to fifth in perhaps the best heat race of the Summernationals so far. Jack Sullivan scratched after blowing up an engine in time trials.

Duplicating his father's line — and success — from the previous heat, outside front-row starter Billy Moyer Jr. barely held off Jimmy Mars all 10 laps for a heat race victory. Moyer Jr. ran the middle of the track while the polesitting Mars was right on the bottom, pressuring the leader throughout and finishing a half-length back at the finish. Fifth-starting Jason Feger got rolling on the high side midway through the race and gained on the leaders, but he settled for third while a lower-running Wendell Wallace got the final transfer spot. Ryan Unzicker was fifth, just ahead of Jason McBride.

Polesitter Billy Moyer led all the way, narrowly leading fellow front-row starter Brandon Sheppard midway through the race in the low groove, then pulling away in the second half of the race while moving up a bit higher on the track. Sheppard was unchallenged in second while Dennis Erb Jr. got third, and Michael Kloos got the fourth and final transfer spot. Dewayne Kiefer was fifth in the caution-free prelim. Mark Miner was sixth, just edging Jeep Van Wormer, who started on the last row and had a tire rubbing through much of the race.

Outside front-row starter Brian Birkhofer slipped around the outside of race-long leader and polesitter Craig Smith at the white flag and kept the lead the final lap for a 10-lap victory in the first prelim. Smith, last night's winner at Tri-City Speedway, settled for second after Birkhofer tried him high and low throughout the race, eventually making the high side work. Jeff Johns was further back in third and Ron McQuerry was a distant fourth for the final transfer spot.

Red-hot Billy Moyer, going for his third straight series victory and fifth victory in six starts, was fastest among 37 qualifiers Saturday at I-55 Raceway for the 18th leg of the 29-race UMP DIRTcar Summernationals. Moyer’s lap of 12.972 seconds puts him on the pole of Saturday’s second heat race at the 3/8-mile oval.

Dennis Erb Jr. leads the series with 1,071 points ahead of Shannon Babb (1,064), Jason Feger (1,057) and Jeep Van Wormer (1,044). ... Because waters from Joachim Creek covered the entrance to the track recently, there was some question of whether the I-55 event would be cancelled, as it has the last two years of the Summernationals. But waters receded enough to allow entry, although water still covers a portion of the entry road. ... Driver Dylan Sharp of Hillsboro, Mo., carried a taped message on his car during hot laps for his uncle, Donnie Ballard, who is celebrating his 30th anniversary with his wife Marty. ... Craig Smith (Tri-City Speedway) and Michael Kloos (Belle-Clair Speedway) are on hand after winning Friday night races. ... Rodney Melvin is back in his own No. 27 after one night in a Gary Gerstner-owned No 6k. ... Brian Birkhofer's No. 15B carried Old Glory on a pace lap during the national anthem. ... Besides Late Models, 29 modifieds and 41 sportsman cars are in action. Track co-owner Ken Schrader is competing in the modified division.