Phillips rallies past Berck for I-80 victory 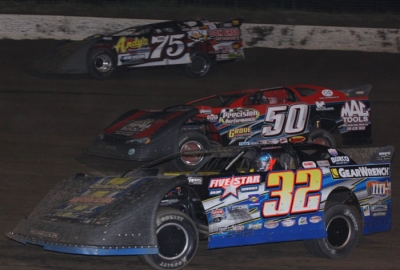 Terry Phillips (75) rallies on the high side. (Ron Mitchell)

GREENWOOD, Neb. (July 2) — Terry Phillips of Springfield, Mo., has won plenty of Lucas Oil MLRA, O’Reilly NCRA and MARS victories over his stellar career. He added three more in one fell swoop Friday at I-80 Speedway as a rallying Phillips overtook Kyle Berck of Marquette, Neb., with six laps remaining for a tri-sanctioned 30-lap victory at the 4/10-mile oval. | Slideshow

Corey Zeitner and Denny Eckrich started on the front row with Eckrich leading one lap before Chad Simpson took command. But Berck was quickly in the mix, going to the cushion to lead the third lap and he pulled away through a long green-flag stretch over Simpson and Eckrich.

A lap-16 caution for Dylan Smith — he spun the No. 6 normally driven by Al Humphries — slowed the action, but Berck continued his torrid pace thereafter while Phillips, who transferred from a consolation race, moved up to battle Eckrich and Simpson.

Three more cautions appeared on laps 22 and 23, first for a slowing Justin Asplin, then for Dave Eckrich’s flat tire and finally for Zeitner’s turn-two spin.

Phillips was poised to attack on the rstart, working the high side to take over on lap 25 and leading the rest of the way for a five-length victory over Berck.

Notes: Phillips drives a Hatfield-powered GRT Race Car with sponsorship from Andy’s Frozen Custard and Don Babb Motorsports. ... Gary Christian, whose team changed the rear-end housing after his heat race, slowed early in the feature to draw a caution and was the second driver pitside. ... Among drivers failing to make the feature lineup: Andrew McKay, Kurt Kile, Bo Egge, Delbert Smith, Zac Simmons and Bryant Goldsmith. ... Reigning MLRA champion John Anderson of nearby Omaha, Neb., was a no-show. ... Next up for MLRA-NCRA-MARS action is a Saturday event at Adams County Speedway in Corning, Iowa.