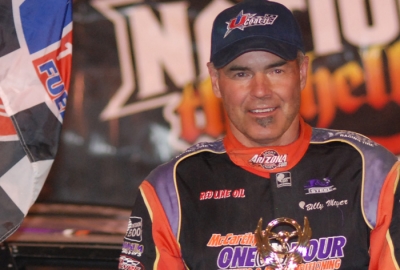 PADUCAH, Ky. (July 1) — Billy Moyer’s No. 21 car didn’t feel that comfortable at Paducah International Raceway. His right-front tire was too soft. And the 52-year-old Hall of Famer from Batesville, Ark., had to drive his car “a little crookeder” than he preferred.

It still all added up to more success on the UMP DIRTcar Summernationals circuit as Moyer captured his series-leading fifth victory in just six series starts, earning $10,000 at the 3/8-mile oval in western Kentucky. | Complete Summernationals coverage

Moyer started out outside the front row and led every lap of the 17th leg of the 29-race series, staying just far enough ahead of a charging Jimmy Mars of Menomonie, Wis., to sew up his series-leading 77th career victory. He’s won three of the last four Summernationals events at Paducah.

“This place, I’ve won quite a few races here, but I still don’t feel like I get around here that good. I mean, the car just doesn’t ever feel comfortable here for some reason — you’re just fighting it all the time,” said Moyer, whose steering was difficult when his right-front tire got too hot amid traffic. “I just had to adjust a little bit how I drove the thing, a little crookeder than I wanted to, to take the push away.”

Mars was within a few lengths with six laps remaining in the 40-lapper, but Moyer stretched back ahead in the final laps to take the checkered flag about 10 lengths ahead of the eighth-starting Mars.

“You just keep riding that wave like I’ve said before,” Moyer said of his Summernationals hot streak. “This is the best I’ve had a car here was tonight. We just keep tweaking on little things.”

Mars, whose second-place finish was his best performance at Paducah, got up to second with 11 laps remaining but couldn’t quite make a serious bid for the lead.

“You had to be real patient on the bottom, and Billy still had good momentum on the top. I could get to him, but getting to him and trying to pass him ... I almost needed lapped traffic to get him held up a little bit on the top side,” Mars said. “It was definitely going to be tough to beat him. Billy’s running real good right now, and I was real happy with our car.”

Third-starting Jason Feger of Bloomington, Ill., battled with polesitter Jeep Van Wormer of Pinconning, Mich., most of the way and slipped by Scott James of Lawrenceburg, Ind., for third late in the race.

James, who ran second most of the way after starting fourth, was hampered by brake problems while Van Wormer ended up fifth.

Three-time and reigning series champion Dennis Erb Jr. of Carpentersville, Ill., started fifth and slipped back to 10th, but it was still good enough to take the series points lead. Erb entered the night tied with two-time champion Shannon Babb of Moweaqua, Ill., but Babb’s team spent most of the night making repairs from a wall-banging heat race and struggled to a 16th-place finish in the main event.

The feature’s lone caution appeared on lap 11 when Babb slowed and headed to the infield pits.

Notes: Moyer’s Victory Circle Chassis has Clements power and sponsorship from L&D Trucking, Henderson Motorsports and Banner Valley Hauling. ... Moyer’s team swapped engines earlier Friday after sensing powerplant problems at the conclusion of Thursday’s victory at Clayhill Motorsports Park. ... On-track medical personnel attended to Gary Gerstner, owner of the No. 6k driven by Rodney Melvin at Paducah. Gerstner was working under the car while it was being fueled and fuel spilled onto his face, crew members from Donny Walden’s team reported. After brief medical attention he was OK. ... Track provisional Tanner English rallied from 21st to finish eighth, just behind his father Terry. ... Ryan Unzicker started seventh but faded to 19th. ... Eighteen cars were running at the finish. ... Many teams leaving the track were caught up in a traffic jam on the circuitous route back to I-24. The open trailer of Allen Christy's team was involved in a collision with a passenger car that blocked the road more than an hour; no one was injured. ... Next up for the Summernationals is a $10,000-to-win event Saturday at I-55 Raceway.

Inheriting the lead when Wendell Wallace slowed on the sixth lap, Brandon Sheppard led the rest of the 12-lapper to transfer to the main event. Fourth-starting Randy Sellars, a former Summernationals winner at Paducah, overtook outside front-row starter Dane Dacus just before the white flag to get the second and final transfer spot. Dacus was third while 14th-starting Brian Shirley's high-side run ended in fourth after his progress was slowed in the final laps. Tanner English was seventh but will start the main with a track provisional.

Starting 10th, Tanner English was up to second coming out of turn two on the first lap and overtook polesitter Chris Hall on the second lap en route to fifth. English's fellow fifth-row starter Brian Shirley worked his way into second more slowly to finish ahead of Hall and Austin Rettig. Those four transfer to the B-Main. Among drivers scratching were Will Vaught (he loaded up and left) and Shannon Babb, who is in line for a series provisional for the main event.

Jeep Van Wormer is on the pole for the main event after a draw among heat winners. Billy Moyer, gunning for his series-leading fifth victory, is outside the front row with Jason Feger and Scott James in the second row.

Here's the backloaded C-Main that could see two series winners starting on the rear after trouble in heat races. In all likelihood Shannon Babb will be taking a provisional and won't make the call after his wall-banging heat-race performance.

Outside front-row starter Scott James swept away from a three-wide battle for the lead on the first lap and grabbed a 10-lap victory in the Scott Earl Motorsports No. 44. Third-starting Jimmy Mars worked the low groove early to get past polesitter Jeff Walston, and after running there a few laps, he moved into a higher groove to chase James. Walston settled down and was third in the three-car breakaway while sixth-starting Rodney Melvin (in Gary Gerstner's No. 6k) was further back in the fourth and final transfer spot.

Polesitter Jason Feger rode his favored high side to an easy 10-lap victory while fellow front-row starter Ryan Unzicker ran second all race long ahead of Jason McBride. The battle for the fourth and final transfer spot was tight one after a lap-eight restart between Brandon Sheppard and Terry English, with English sliding underneath in turns one and two. Tanner English had the fourth and final transfer spot but a flat right-rear tire cost him the spot; Brian Shirley pulled out with a flat right-rear tire on the fifth lap. Jim Moon spun into the turn-three infield to draw a lap-eight caution.

Taking the lead when polesitter Shannon Babb hit the wall not once but twice, fellow front-row starter Jeep Van Wormer cruised the rest of the way for a 10-lap victory. Babb, the co-series points leader, led the first three laps after surviving a push that nearly sent him into the wall in turns one and two. On the fourth lap, Babb again slid up, this time brushing the wall and allowing Van Wormer to bang past on the backstretch. Babb threw his No. 18 into turn three and made hard contact with the wall that appeared to cause major damage to the rear wheels and suspension. Kevin Cole got second on the lap-four restart and held that spot the rest of the way while Tim Brown and eighth-starting Billy Moyer Jr. got the final two transfer spots. Dane Dacus was fifth and third-starting Joe Morris ended up sixth, but neither contended for transfer spots.

Polesitter Billy Moyer built a half-straightaway lead after five laps and cruised the rest of the 10-lap prelim, which ran caution-free. Outside front-row starter Dennis Erb Jr. was second with fifth-starting Jack Sullivan in third. Nick Lyons for the fourth and final transfer spot, edging Wendell Wallace after a lap-eight restart. Second-row starter Will Vaught lost a few positions on the first lap, then spun between turn and two into the infield on the seventh lap. When Vaught pulled back onto the backstretch to draw a caution, promoter Bob Sargent told officials to send him to the pits.

Billy Moyer of Batesville, Ark., leading the series with four victories, was fastest among 43 qualifying Friday at Paducah International Raceway for the 17th leg of the UMP DIRTcar Summernationals. His 15.851-second lap at the 3/8-mile oval puts him on the pole for the first heat race.

The top four finishers from each of four heats transfer to the main event. Four finishers from a C-Main go to the B-Main, which transfers two cars to the 40-lap feature, which pays $10,000 to the winner. Three provisional starters round out the 21-car field.

The tour is making its lone visit to the Bluegrass State. ... Billy Moyer of Batesville, Ark., notched his series-leading fourth victory Thursday at Tennessee Clayhill Motorsports Park. ... Reigning Dirt Track World Champion Jimmy Mars of Menomonie, Wis., and Will Vaught of Crane, Mo. (stripped of a victory at Cedar Lake Speedway when he was light at the scales) are among drivers returning to the series. .... The $25,000 series championship chase couldn’t be tighter with Shannon Babb of Moweaqua, Ill., and Dennis Erb Jr. of Carpentersville, Ill., tied at 1,019 points apiece. Six drivers are within 87 points: Jason Feger (982), Jeep Van Wormer (979), Ryan Unzicker (940) and Jack Sullivan (932). ... There are now 11 drivers who have entered every series event; a 12th driver, Richie Hedrick, departed during last night’s event at Clayhill. ... Four drivers have two Summernationals victories apiece at Paducah: Billy Moyer, Shannon Babb, Don O’Neal and Kevin Claycomb. ... Moyer won last year’s race. ... Rodney Melvin’s No. 27 will get a rest for a few days as he pilots the Gary Gerstner-owned No. 6k usually driven by Michael Kloos. Melvin said he plans to run Gerstner’s car the next two nights. Brian Shirley has fielded the car in occasional series races in recent years. ... Jim Moon broke a rear end in Thursday’s action at Clayhill, but he got a ring gear and center section from Nick Lyons and has made repairs. ... Kevin Cole of Christopher, Ill., leads Paducah's weekly Late Model points. ... Terry English missed his qualifying spot.