Payne dominates for victory at Oskaloosa 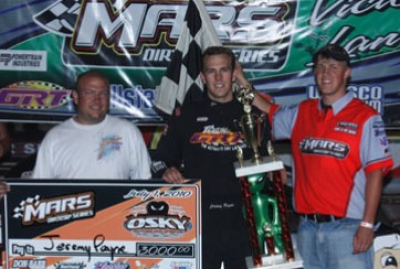 OSKALOOSA, Iowa (July 1) — Jeremy Payne of Springfield., Mo., led all 30 laps Thursday at Southern Iowa Speedway to capture his first victory of the season on the MARS DIRTcar Series. The 24-year-old Payne’s victory at the half-mile oval paid $3,000 for his seventh career MARS victory. | Slideshow

Payne’s teammate, Terry Phillips, started fifth and worked his way up to second while Chad Simpson of Mount Vernon, Iowa, finished third after holding that spot most of the race, which was slowed by a single lap-17 caution. Al Purkey of Coffeyville, Kan., and Jason Utter of Columbus Junction, Iowa, rounded out the top five in the first race of a MARS tripleheader in Iowa and Nebraska.

Eric Turner of Springfield, Mo., the MARS points leader heading into the race, got too high in turn one and heavily damaged the right side of his No. 99T. He started with a provisional and finished 14th in the main event.

Notes: Payne’s GRT Race Car has a Hatfield Racing Engine and sponsorship from Andy’s Frozen Custard and Don Babb Motorsports. ... Payne’s last series victory came July 11, 2009, at Springfield (Mo.) Raceway. ... After Eric Turner’s heat-race accident, several drivers and crews pitched in to help Turner make repairs on his car. ... The series heads to I-80 Speedway in Greenwood, Neb., on Friday for an event co-sanctioned by the Lucas Oil MLRA circuit.