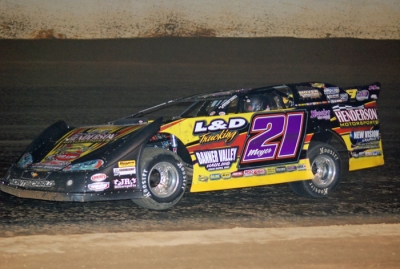 ATWOOD, Tenn. (July 1) — Returning to the series where he won the first three races, Hall of Famer Billy Moyer of Batesville, Ark., roared past Jason Feger on the 23rd lap at Clayhill Motorsports Park to capture the caution-free 16th leg of the 29-race UMP DIRTcar Summernationals. | Complete Summernationals coverage

The eighth-starting Feger swept into the lead by using the extreme high groove at the 3/8-mile oval, blitzing the field to build a full straightaway lead by the 10th lap.

But when competitors filtered into a rubber strip in the low groove before the midway point of the 40-lapper, the fourth-starting Moyer quickly cut into Feger’s lead. Feger dropped to the low groove just past the halfway point, but Moyer’s No. 21 was too good and blew past him on the frontstretch to lead lap 23.

“I looked up and I thought it was over. I thought we were racing for second at that point,” Moyer said. “I felt it was better right around the bottom there were we finished the end of the race with. I just couldn’t get there at the start — there were other cars down there.”

Feger, who took advantage of track prep that added water to the top groove before the main event, couldn’t stop Moyer’s charge.

“I knew it was going to rubber on the bottom, and I thought I’d try to get as big of a lead as I could on the top and maybe hold on, maybe not,” Feger said. “The first time I turned down (into the low groove), I just drove in too hard and took a bad push and he drove by me. And that was about all she wrote.”

From there Moyer built more than a quarter-track lead on Dennis Erb Jr., who dropped Feger to third on lap 29. Erb made up some ground on Moyer in the late-going, but only because single-file lapped traffic slowed the leader's progress. Moyer took the checkers a straightaway ahead of Erb for a $5,000 payday and his series-leading 76th career victory.

Erb, of Carpentersville, Ill., finished second while Feger, of Bloomington, Ill., held on to third, fighting off front-row starter Billy Moyer Jr. of Batesville, Ark., the winner's 22-year-old son. Shannon Babb of Moweaqua, Ill., who entered the race leading the series points, rallied from the 12th to round out the top five at the 3/8-mile oval in northwest Tennessee. Polesitter Jeff Walston of Paducah, Ky., faded to finish 11th, the last car on the lead lap.

Erb's runner-up finish knotted the series chase with Babb at 1,019 points apiece after 16 of 29 races.

Moyer, a six-time series champion, notched his fourth victory in his fifth 2010 Summernationals start. He captured the Brownstown (Ind.) Speedway opener and events at Kankakee County (Ill.) Speedway and Cedar Lake Speedway in New Richmond, Wis., before a blown engine knocked him out of the second of two events at Cedar Lake.

Notes: Moyer’s Victory Circle Chassis used Clements power and has sponsorship from L&D Trucking, Henderson Motorsports and Banner Valley Hauling. ... Sixteen of 21 starters were running at the finish. ... Brandon Thirlby retreated to the infield early in the race. ... Jack Sullivan pulled out of the turn-one exit on lap 14. ... Rodney Melvin pulled to the infield on lap 26. ... Terry English dropped to the infield with a flat right-rear tire on lap 31. ... T.J. Herndon had to change tires after driver introductions because he was using American Racers; tour events are run under a three-compound Hoosier Tire rule. ... Herndon pulled out late in the race. ... The lapped car of Randy Sellars slipped under Jason Feger on lap 29, opening the door for Dennis Erb Jr. to grab the second spot.

Provisionals go to Brandon Thirlby (series), Donny Walden (’09 UMP points) and Terry English (track). ... The main event might be a tire game. Jack Sullivan won the B-Main on Hoosier LM-20s, the softest compound, and the track is being lightly reworked for the main event. Last year’s race bolted down in a strip of rubber and everyone used hard tires, but this year it might be a trickier call, one tire expert predicted ... Shannon Babb’s team worked until 1 a.m. last night repairing their four-bar suspension Rocket Chassis, which tore up the rear end during the Charleston (Ill.) Speedway feature. The team planned to run that car at Clayhill but then switched to their backup car, converting it from a swingarm rear suspension to a four-bar. After the heat race, the team was also replacing a skid plate; the previous one allowed mud to come up and knock off the fan belt. “What have I done wrong to deserve this?” Babb cracked. ... Jason McBride got second place in his heat race by slowing down. “I started letting off a little earlier, rolling in on the bottom,” said McBride, who took a spot from Randy Sellars in the race’s waning moments. He was among driver surprised Sullivan won the consolation on 20s. “Everybody’s confused now,” he said. ... Polesitter Jeff Walston has only made one other career start at Clayhill in a Crate Late Model last season. “We’ll see what we can do,” said the 29-year-old Paducah, Ky., driver. “We’ll run 40 and see if we can learn something.” And win $5,000. ... Drivers were called to the frontstretch for the main event at 9:50 p.m.; UMP plans to have them go through the grandstands with their helmets before the race to collect money for Special Olympics. ... Jim Moon scratched from the B-Main because of a broken rear end, and it may end his series run. He’s entered 15 of 16 events using a CT525 all-aluminum crate engine.

Polesitter Jack Sullivan led all the way for the victory while third-starting Brandon Sheppard got the second transfer spot.

Here's the lineup for the B-Main, which sends two drivers to the main event:

Jeff Walston will start on the pole after drawing the top spot among heat winners. Billy Moyer Jr. starts outside the front row while Dennis Erb Jr. and Billy Moyer start on the second row. Because of scratches by several drivers, the C-Main was scrapped and everyone will run the B-Main, which sends two drivers to the main event.

Third-starting Billy Moyer won a dazzling battle up front in the early laps, then held off a stirring high-side rally by polesitter Jason Feger to win the 10-lap final heat. Terry English led early from outside the front row over Feger, but Moyer slipped under both of them to lead the fourth lap. But Feger, who dropped back to third, jumped to the high side and began tracking Moyer, nipping him at the flagstand on the eighth lap. But Feger slipped a bit on the next lap and Moyer edged back ahead for the victory. Fourth-starting Shannon Babb was further back in third and fifth-starting Jeep Van Wormer got the final transfer spot. English faded to finish fifth.

Overall fast qualifier Billy Moyer built a near-straightaway lead by the midpoint of the 10-lapper and cruised to victory. Outside front-row starter Tanner Engish was second, holding off fourth-starting Dane Dacus. Behind them, Kevin Weaver ran the high side and Brandon Sheppard the low groove in a battle for the final transfer spot with Weaver getting the position, pressuring Dacus on the final lap but falling a few lengths shorts

Polesitter Jeff Walston overtook outside front-row starter Randy Sellars on the fifth lap and led the rest of the way in a battle of western Kentucky racers. Sellars led the first four laps from the high groove, but Walston reeled him in, took the lead and survived a near-tangle with a slower Zachary White exiting turn four on the eighth lap. Jason McBride slipped under Sellars on the last lap to get second with Sellars third. T.J. Herndon, a Crate Late Model regular at Clayhill who has put a modified engine in his Late Model, got the fourth and final transfer spot.

Polesitter Dennis Erb Jr. raced to victory in the first heat, hugging the inside lane with third-starting Ryan Unzicker in pursuit. Unzicker finished a half-straight back in second with outside front-row starter Randy Melvin another half-straight back in third. Wendell Wallace was fourth after an early bump with Jack Sullivan exiting turn four. Sullivan was fifth and will head to the B-Main. Jim Moon drew two cautions, once for a first-lap spin, then when he stopped in the infield just off the frontstretch.

Shannon Babb leads the series with 954 points over Dennis Erb Jr. (939) and Jeep Van Wormer (930) .... Last night’s winner at Charleston (Ill.) Speedway, Brian Shirley, skipped the event and plans to run Friday at Paducah, Ky. ... Dane Dacus of Arlington, Tenn., was a $7,500 Southern All Stars winner at Clayhill on April 17. ... Ryan Unzicker is going with his older red MasterSbilt tonight (a former Ray Cook car) after his black car lost power when he tried to head to the track for hot laps; he missed hot laps but was third fastest in his qualifying group. ... Two big-time Batesville, Ark., drivers are returning to the series at Clayhill. Billy Moyer won the first three series races in four starts at the beginning of the 29-race tour and Wendell Wallace is 13th in points after running the first 11 events. ... Local driver T.J. Herndon, who normally drives a crate engine Late Model, has dropped a 388 c.i modified powerplant into his car. “We might have a shot, I don’t know,” Herndon said. ... Richie Hedrick's car was pushed off the track in hot laps and Hedrick loaded up and pulled out of the pits just before time trials. ... Curtis Roberts slowed his smoking car in turn three on his qualifying lap. ... Last year’s Summernationals fast time at Clayhill was 15.049 seconds by Billy Moyer. ... Besides Late Models, modifieds, street stocks and hobby stocks are in action, but Late Models are scheduled to go first in the racing order throughout the night. ... The air-conditioned bathrooms continue to get rave reviews. "I thought I was in a VIP lounge," said one crew member.