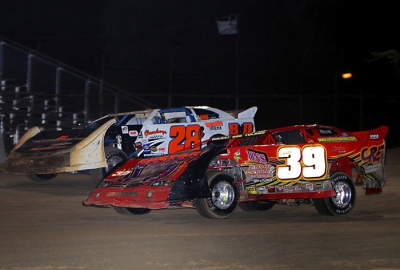 INDEPENDENCE, Iowa (June 30) — What happened at the back of the pack went a long way in determining who finished at the front of the field in Wednesday’s Deery Brothers Summer Series feature at Independence Motor Speedway.

Rob Toland of Davenport, Iowa, got the better of a back-and-forth battle with Kevin Blum of Colona, Iowa, then outran Terry Neal of Ely, Iowa in the race to the $2,000 checkers. The IMCA Late Model tour victory was Toland’s career 19th and his first on the circuit since June 2007. | Slideshow

Mark Burgtorf of Quincy, Ill., a three-time winner this season and second in the point standings coming into the night, started on the pole and led the first 12 laps. Burgtorf was about to get into lapped traffic when two backrunners checked up, and he was unable to avoid a collision with Joel Callahan, joining defending champion Jeff Aikey as an early casualty.

Toland and Blum started on the front row in the ensuing restart and traded the front spot four times, Toland on the bottom of the 3/8-mile oval while Blum ran the next line up. After running virtually side by side for a dozen laps, Toland finally settled into first for good just after midway.

Neal caught Blum for second with eight laps left but couldn’t make up enough distance to challenge Toland before the end of the 50-lapper. Dan Shelliam and series points leader Ray Guss Jr. rounded out the top five.

Notes: Toland’s Gustaf-powered entry is sponsored by Deines-Nitz Solutions and Curt’s Racing Enterprises. ... Greg Kastli, who finished 13th, won his first-ever Late Model feature 31 years earlier to the day at Independence. ... The winner of the $250 Sunoco drawing was Travis Smock. ... With eight races in and eight to go, the next Deery Brothers date is July 7 at Knoxville (Iowa) Raceway.