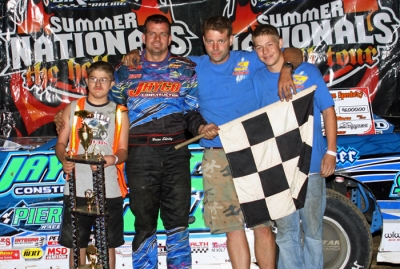 “If I didn’t get off the bottom,” said Shirley, who followed a strip of rubber laid down on the 3/8-mile oval, “I knew nobody was going to get around me.”

The 29-year-old Shirley cruised out front most of the way on the one-grooved track, but he had a lap-17 scare when a pair of lapped cars tangled in front of him, resulting in a collision with Shirley and second-running Curtis Roberts of Coleman, Mich. Shirley maintained control while Roberts spun to draw a caution flag.

“I saw Chris Dick get into (Jim) Moon, and then I didn’t know if they were going to spin out or what. I tangled with him and I tangled with (Roberts),” Shirley said. "I feel bad for that guy running second, but heck, when you’re on a racetrack that’s one-laned and those guys are wrecking in front of you, unfortunately, that’s racing.”

Roberts was restored to the second spot for the restart, but he faded quickly with steering problems and eventually pulled to the infield.

“I felt like my tires were coming in and I felt like I was actually getting a little bit quicker than Shirley,” said Roberts, who plans on running series events through Sunday. "I saw an opening to the high side and it closed up with the lapped cars ... tough break for us, but we’ll move on. It didn’t hurt the car too bad.”

In the second half of the race, third-starting Jack Sullivan of Greenbrier, Ark., took up the chase of Shirley along with sixth-starting Ryan Unzicker of El Paso, Ill., in a three-car breakaway. Jason Feger of Bloomington, Ill., joined the top three in single-file mode before the second and final caution on lap 33 as series points leader Shannon Babb of Moweaqua, Ill., stopped in turn two with a rear-end problems.

Sullivan stayed with Shirley the final laps but never made a serious challenge in settling for second. Unzicker was further back in third, fending off Feger despite fighting suspension failure problems in the final laps. Jeep Van Wormer of Pinconning, Mich., held off Dennis Erb Jr. of Carpentersville, Ill., to round out the top five.

The sixth-running Babb's misfortune tightened up the series points chase. Unofficially as the 29-race tour enters the second half of the schedule, Babb has 954 points to lead Erb (939) and Van Wormer (930), who has seven top-five finishes in the last eight features.

Outside front-row starter Chris Dick led polesitter Jason McBride all the way while Brandon Sheppard joined them in a three-car breakaway. All three transfer to the main event. Also transferring in lieu of a track provisional at non-Late Model Charleston is fourth-finishing Brandon Thirlby, who nearly got too high on two occasions but staved off challenges from Richie Hedrick. Hedrick should join the field as a series provisional, and it appears Frank Heckenast Jr. will get the provisional based on '09 UMP points.

In the redraw among heat winners to set the first three starting spots, Brian Shirley is on the pole with Curtis Roberts alongside. Jack Sullivan starts third. Roberts, looking for his first career Summernationals victory, thinks he’s in the right place. “That looks like where the momentum’s at,” he said while watching street stock heat race. ... Donny Walden has dirtied six driving suits and hasn’t had a chance to do laundry, so he’s wearing a former Billy Drake suit the former Illinois driver loaned him. Drake always had a little pink on his car and his driving suits, so Walden wasn’t crazy about wearing it. But after he transferred to the main event through the heat, he had to admit it: “It was the pink,” he said with a smile. ... Last year’s feature was severely one-grooved, and drivers are wary it’s headed that way again. Billy Moyer Jr. did his best to work under Ryan Unzicker for the second spot in his heat race, but Moyer said the flatness on the low part of the track is no match for drivers running on the banking at the top of the track, making passing difficult. ... Jason McBride is on the pole for the C-Main. ... Brian Shirley’s heat race victory was his third of the series.

The C-Main lineup. The race was originally scheduled to transfer three cars to the main event, but because Charleston doesn't run a weekly Late Model division, the fourth-place finisher will transfer as the de factor track provisional

Polesitter Brian Shirley built a straightaway lead by the midpoint of the 10-lapper and cruised to victory. Runner-up Ryan Unzicker fought off several low-groove challenges from Billy Moyer Jr., who was third with Kevin Weaver a distant fourth. Donny Walden was further back for the fifth transfer spot.

Outside front-row starter Jack Sullivan beat polesitter Jason Feger into the first turn and led all the way, taking the checkers nearly a half-straightaway in front of Feger. Scott Schmitt and Mark Voigt were further back in third and fourth, while eighth-starting Jim Moon was a distant fifth for the final transfer position.

Winning the battle of an all-Michigan front row, Curtis Roberts got the jump on polesitter Jeep Van Wormer and edged away the rest of the 10-lapper for the victory. Fourth-starting Shannon Babb pressured Van Wormer on an early restart before settling for third ahead of Dennis Erb Jr. Last year's Charleston winner Rodney Melvin was a distant fifth for the final transfer spot. A lap-three caution appeared for Richie Hedrick in turn two.

Jeep Van Wormer of Pinconning, Mich., posted his series-leading fifth fast time on the UMP DIRTcar Summernationals on Wednesday, topping 26 qualifiers at Charleston Speedway on the 15th leg of the 29-race tour. Van Wormer’s time of 13.77 seconds on the 3/8-mile oval puts him on the pole of the first of three heat races.

Other heat race polesitters following group qualifying: Jason Feger of Bloomington, Ill., and Brian Shirley of Chatham, Ill. (driving his own No. 3s).

The top five finishers from each of three heats transfer to the main event. Three drivers from a consolation race and three provisional starters round out the 21-car field. The night’s 40-lap feature pays $5,000 to the winner at the 3/8-mile oval, where Rodney Melvin of Benton, Ill., won in ’09.

The night marks the 15th straight night of series action. ... Shannon Babb of Moweaqua, Ill., leads the series with 914 points over Dennis Erb Jr. (883) of Carpentersville, Ill., and Jeep Van Wormer (869) of Pinconning, Mich., who captured Tuesday night’s victory at I-96 Speedway in Lake Odessa, Mich. ... Kevin Weaver of Gibson City, Ill., is returning to action for the first time since the second series race, when chest pains and blurred vision sent him to doctors, who discovered a blocked heart artery. A stint was implanted to open the blockage Thursday and the 2000 series champion says he’s feeling much better (look for more details in today's Summernationals Minute). ... Besides last year, the only other time Charleston hosted the Summernationals was in 2002 when Bob Pierce won. ... Curtis Roberts of Coleman, Mich., is joining the series for the rest of the week, running through Sunday’s race at Lincoln (Ill.) Speedway with plans to return to the tour the following weekend at Tri-City (Ill.) Speedway and Fairbury (Ill.) American Legion Speedway.