Van Wormer tops Shiels for UMP tour win at I-96 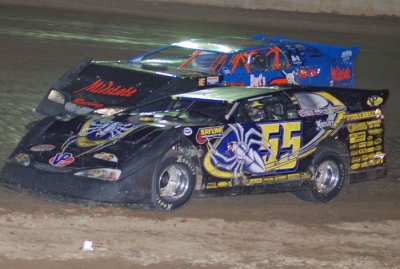 Van Wormer, a series regular from Pinconning, Mich., took command on the one-grooved track and cruised the rest of the 30-lapper for a $5,000 payday on the 14th leg of the 29-race UMP DIRTcar Summernationals circuit. The victory was Van Wormer’s second of the season and 13th of his series career. | Complete Summernationals coverage

“You gotta take advantage of everything when you can,” said Van Wormer, who hounded Shiels through the first 13 laps as they pulled away from the field. "He made that one mistake — that might’ve been the only mistake he was going to make — and I was actually able to capitalize on it and take it home.”

Shiels, a Britton, Mich., driver gunning for his first career feature victory, settled for a career-best second and a career-high $2,500 payday at the half-mile oval. Seventh-starting Brian Ruhlman of Clarklake gave Michigan a sweep of the top three spots while sixth-starting Ryan Unzicker of El Paso, Ill. was fourth.

Front-row starter Zack Olger of St. John’s, Mich., rounded out the top five, holding off series points leader Shannon Babb of Moweaqua, Ill., the winner in the only other series event at the track in 2005.

The surprising Shiels grabbed the early lead while Van Wormer slipped by Olger on the first lap. The top two were a full straightaway ahead of Ruhlman by the fifth lap at the half-mile oval, with Van Wormer hot on the leader’s heels when Rusty Schlenk slowed to draw the race’s lone yellow.

On the restart, Shiels cruised through turns one and two with no problem, but his white No. 51 drifted high exiting turn four and kicked up an ominous trail of dust as Van Wormer smoothly scooted past before the flagstand.

“We had that restart, and I was back probably two or three car lengths on him, but there was a little slick spot right there in the middle of (turns) three and four,” said the 35-year-old Van Wormer, who won on I-96 Speedway’s 3/8-mile layout earlier this season. "I was laying back a little bit, not getting in the gas so I could stay in the bottom where there was a lot of rubber, and he pushed up that one time, and I got in my rubber, and fueled up real hard. It was a pretty easy pass, honestly. I couldn’t ask for anything better.”

Shiels stayed with Van Wormer the rest of the way, but with passing difficult on the high-speed track where everyone hugged the bottom groove, he knew the race was over.

“Coming off (turn) four there’s just this little section of track where you just lose grip just for a second, then you’re back in it. I overthrottled it over it and just slipped up and lost it, and he went right on by,” Shiels said. “When I got up to the wall, I was in the loose stuff, and I knew I was in trouble then.”

Van Wormer's victory boosted him to third in the $25,000 series points chase with 869 points. He's trailing two-time champ Babb (914) and three-time champ Erb (883) as the series hits the halfway point.

Notes: Van Wormer’s Iron Motorsports Rocket Chassis is sponsored by Bayline Fire Protection and Globe Technologies. ... His previous series victory came June 21 at Vermilion County Speedway in Danville, Ill. ... Van Wormer notched his fourth straight top-five finish on the series and sixth top-five in the previous seven races. ... The first of Van Wormer’s 13 career series victories also came in his home state on July 12, 2002, at Hartford (Mich.) Speedway Park. ... Richie Hedrick, who gave up his 16th starting spot after switching to a backup car, pulled out on lap 26. ... Eric Spangler headed pitside during the lap-13 caution period. ... Next up for the series is a $5,000-to-win event at Charleston (Ill.) Speedway, where Rodney Melvin won in ’09.

Third-starting Tom Sprague Jr. jumped into the early lead as front-row starters Curtis Roberts and Matt Miller fell back early in the race. Sixth-starting Frank Heckenast Jr. got quickly up to second and the Sprague-Heckenast duo ran away from the rest of the field. Rich Neiser ended up in third. The lone caution appeared Jason Feger scratched from the lineup but is in line for a provisional starting spot for the feature.

Polesitter Rusty Schlenk cruised to a victory and transfers to the B-Main along with Rusty Seaver, Ryan Vanderveen and Scott Baker.

The C-Main is on the track with the top four transferring to the B-Main lineup below:

Unheralded Devin Shiels will start on the pole for the 30-lap feature with fellow Michigan driver Zack Olger alongside. Jeep Van Wormer and Billy Moyer Jr. start in the second row. Lower divisions are completing their preliminaries wtih a Late Model C-Main coming up that sends four drivers to a B-Main, which sends two drivers to the main event.

Polesitter Zack Olger cruised to an easy victory, winning by more than a straightaway over fourth-starting Bill Bray. Third-starting Kris Patterson was third, holding off race-long challenges from a charging Richie Hedrick, who started ninth. Hedrick got the final transfer spot while Rich Neiser was fifth. Outside front-row starter Carl Ries got a poor start and faded to finish ninth while fifth-starting Mark Anderson, who got squirrelly on the frontstretch on the second lap, pulled pitside with a flat left-rear tire a lap later.

Billy Moyer Jr. won his third on the Summernationals, jumping into the lead from his pole position and cruising to victory. Moyer had a straightaway lead at halfway and outdistanced fellow front-row starter Brian Ruhlman. Second-row starters Brandon Sheppard and Rodney Melvin got the other transfer spots while seventh-starting Tom Sprague Jr. was fifth. Fifth-starting Ryan Vanderveen slipped high out of the groove in turn four on the first lap, dropping back early and never recovering. The night's first Late Model caution appeared on the first lap for a bad start.

Polesitter Jeep Van Wormer got the jump at the outset and led all the way, building a half-straightaway lead by the halfway point and cruising the rest of the way. The third-starting Babb settled for second with the fifth-starting Eric Spangler third and the seventh-starting Jason McBride in the fourth transfer spot. The outside lane drivers were held up on the first lap when outside front-row starter Matt Miller banged wheels with Spangler entering turn one on the first lap and skittered out of the groove, allowing the inside-lane cars to hold the top four spots. Miller challenged McBride late but settled for second.

Outside front-row starter Devin Shiels beat polesitter Dona Marcoullier into turn one and pulled away for an easy victory in the 10-lapper. Third-starting Ryan Unzicker slipped past Marcoullier in the second half of the race and cut into Shiels' lead, but settled for second (and then spun over the turn-two banking after taking the checkers). Marcoullier and Dennis Erb Jr. got the final two transfer spots in the cautiion-free prelim.

Jeep Van Wormer of Pinconning, Mich., topped 45 qualifiers Tuesday on I-96 Speedway’s half-mile oval for the 14th leg of the 29-race UMP DIRTcar Summernationals. Van Wormer’s lap of 19.462 seconds puts him on the pole of the second heat race.

The top four finishers among the four heat races transfer to the 30-lap main event, which pays $5,000 to the winner. Top C-Main finishers will transfer to the B-Main, which will send two cars to the main event. Three provisional starters round out the 21-car field.

Several drivers weren’t happy about dry track conditions and a narrow low groove, voicing their concerns to track officials about the likelihood of a poor quality of racing on the half-mile configuration that’s only hosted a few races this season. Van Wormer and Dennis Erb Jr. were among drivers appealing to promoter Mike Mouch just before qualifying. .... Shane Clanton of Locust Grove, Ga., holds the half-mile track record with a lap of 17.824 seconds set May 18, 2007, at a World of Outlaws Late Model Series event. ... The race drew 31 home-state drivers, including series regulars Jeep Van Wormer and Brandon Thirlby. ... Series points leader Shannon Babb won the only previous series event at I-96 in 2005. ... Jeep Van Wormer won a Sunoco ALMS event earlier this season on I-96’s 3/8-mile oval. ... Ryan Unzicker is fielding his red No. 24, his backup car piloted Matt Rhyne at the Vermilion County Speedway series event. ... Sam Epling enters the event fresh of a Saturday night victory at I-96. ... The Summernationals is on a streak of 14 straight races in 14 days and, barring a rainout, the first 19 races will be run consecutively. ... A dozen drivers have run every event.